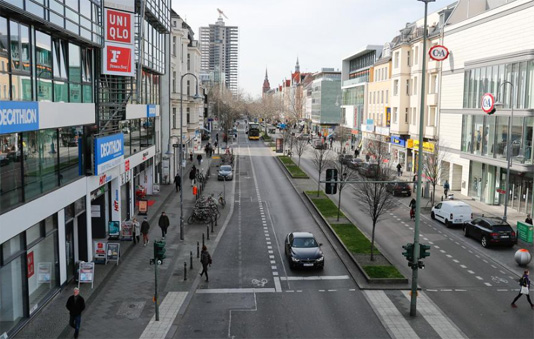 Online Desk : Italy on Wednesday reported nearly 500 new deaths from the novel coronavirus, the highest one-day official toll of any nation, as Donald Trump ordered sweeping new action against the pandemic and declared himself a war president.

With the number of global coronavirus infections shooting past 200,000, governments announced new containment measures and the US Congress approved a $100 billion emergency relief package.

But markets took another beating and braced for grim weeks ahead.


“Not since the Second World War has our country faced a challenge that depends so much on our collective solidarity,” Merkel said in a television address.

Dire news came out of Italy which reported 475 new deaths. More than 8,700 people have died around the world with fatalities in Europe now topping those in Asia, where the outbreak began in December in China.

Italy has now recorded more than one-third of global deaths and has shut down all businesses and public gatherings — steps that have spread across the world.

“The main thing is, do not give up,” Italian National Institute of Health chief Silvio Brusaferro told reporters.

“It will take a few days before we see the benefits” of containment measures, said Brusaferro.


“We must maintain these measures to see their effect, and above all to protect the most vulnerable.”

French President Emmanuel Macron on Twitter called for further “financial solidarity” within the Eurozone, after the European Central Bank announced a 750-billion-euro bond-buying scheme to contain the economic damage from the virus.

Britain, where Prime Minister Boris Johnson had initially chosen a different path, followed the lead of his European counterparts and said schools would shut nationwide from Friday.

The death toll in Britain has topped 100 and lawmakers were cautioned to steer clear of the prime minister’s weekly question time, amid warnings that parliament was a particularly infectious area.

Preparing for a spike in ill Americans, Trump invoked a Korean War-era law that allows the government to compel businesses to sign contracts — which can be used to expand production of necessities such as protective masks.

“I view (myself) as a, in a sense, a wartime president. I mean, that’s what we’re fighting. I mean, it’s a very tough situation here,” he told reporters at the White House.

“It will be a complete victory,” he vowed.


Governor Andrew Cuomo said that Trump told him the 1,000-room USNS Comfort would sail to New York’s harbour, providing a floating hospital for the metropolis.

The US Senate easily completed passage — and Trump quickly signed into law — a $100 billion package that would provide for free testing, sick pay and paid family leave.

That came a day after Britain unveiled a o330 billion ($400 billion, 363 billion euros) package of loans for virus-hit businesses.

But financial markets were unimpressed. The Dow Jones Industrial Average plunging another 6.3 percent after similar routs on European and Asian markets.

Trump and Canadian Prime Minister Justin Trudeau announced they were closing the world’s longest international border to all but essential travellers for 30 days, although trade will continue unfettered.

The International Labour Organization warned the pandemic could leave up to 25 million more people out of work and drastically slash workers’ incomes.

The head of the World Health Organization, Tedros Adhanom Ghebreyesus, warned that COVID-19, the illness caused by the virus, constituted an “unprecedented threat.”

In a virtual news conference, he stressed the need for countries everywhere to “come together as one against a common enemy: an enemy against humanity.”


He sounded a special alarm for Africa, saying the continent must “wake up” and “prepare for worst.”

In the first known fatality in sub-Saharan Africa, officials in Burkina Faso reported the death of a high-ranking politician — Rose-Marie Compaore, the first-vice president of the parliament, who was 62 and diabetic.

Nearly 600 cases have been reported in sub-Saharan Africa, raising particular alarm due to the continent’s fragile healthcare systems.

Latin America has more than 1,300 recorded infections and the continent’s most populous country Brazil announced its first fatality on Tuesday.

Two Brazilian cabinet ministers and the head of the country’s Senate said they had tested positive for new coronavirus, while two US Congress members became the first from that body to announce that they had the virus.

The WHO has also called for “aggressive” action in Southeast Asia to combat COVID-19 after it was largely spared alarming case numbers clocked elsewhere in Asia.

Malaysia has already banned travellers from overseas, while Vietnam has blocked visitors from several European nations.

Australia’s government urged citizens to not travel abroad and banned gatherings of more than 100 people as cases topped 500.


A day after the European Union imposed a 30-day ban on travellers from outside the bloc, EU Commission chief Ursula von der Leyen acknowledged politicians had initially underestimated the threat.

“We understand that measures that seemed drastic two or three weeks ago, need to be taken now,” she told Germany’s Bild newspaper.

Within the bloc some countries have sealed borders, while bars, restaurants and most shops have closed their doors until further notice, bringing life in Europe’s normally bustling cities to a halt.

On Thursday China reported no new domestic cases for the first time since it started recording them in January.

But it recorded 34 that came from abroad, the biggest daily increase in two weeks, according to the National Health Commission.

In a sign of the shifting hotspot, China said it would send two million masks and 50,000 coronavirus testing kits to the EU to help countries battle the outbreak.

Every sector from tourism to food to aviation is affected as the global economy effectively goes into shutdown.

The outbreak has also shredded the global sporting and cultural calendar.


In football, the European and Copa America championships have been postponed until next year, and the French Open tennis tournament has been delayed to the autumn.

The Tokyo Olympics still hang in the balance.

Both the Eurovision Song Contest and the annual Glastonbury music festival in England have been axed.
(AFP)