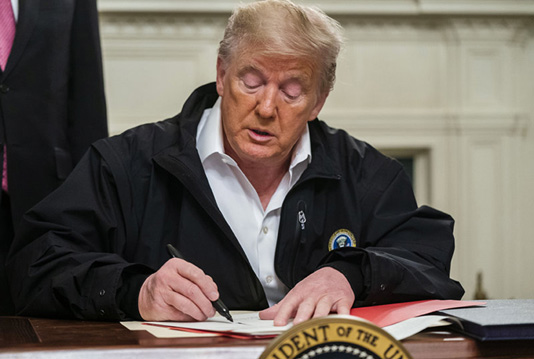 Online Desk : US President Donald Trump on Wednesday signed a $100-billion emergency aid package that ensures sick leave to Americans workers who fall ill from the new coronavirus, with more federal assistance in the pipeline.

The bipartisan House-passed measure easily cleared the Senate by a vote of 90 to eight earlier Wednesday. Hours later Trump said in a statement that he signed the legislation into law, providing a rare example of Congressional Democrats, Republicans and the presidency working together quickly during his administration.


It provides for free coronavirus testing for those who need it, sick pay and paid family leave, and bolsters unemployment insurance for millions of Americans.

The legislation aims to strengthen protections in the face of a global health crisis that has already killed more than 110 people in the United States, where more than 7,300 cases have been confirmed.

McConnell acknowledged the urgent need to get relief to workers, but stressed he would compel the chamber to stay in session until a broader, Phase Three relief package is completed.


“I will not adjourn the Senate until we have passed a far bolder package that must include significant relief for small businesses all across our country,” McConnell said.

“Just how long it will take to go through these steps is unclear,” he added. “We are moving rapidly because the situation demands it.”

The White House and lawmakers are negotiating a $1.3 trillion package — among the largest federal emergency plans ever — that reportedly would include up to $500 billion in direct check payments to Americans, and $300 billion in loans to small businesses.

Wednesday’s vote took place under extraordinary circumstances, with roll calls extended to 30 minutes to allow senators to comply with US health precautions, including keeping a safe distance from each other.


“Be aware of the social distancing… as we come over to the chamber and as we depart,” McConnell told colleagues, urging against congregating on the Senate floor.

The vote came after Mnuchin went to the US Capitol to appease concerns by some Senate Republicans about the ramifications that sick and family leave could have on small businesses that are already suffering economically from the crisis.

“This is literally the worst time in living memory to pile even more burdens and costs onto small businesses, which are themselves fighting to stay alive, unless we back it up with major assistance,” McConnell said.

He said Democrats are proposing a “Marshall plan” reminiscent of World War II-era reconstruction, but for US health infrastructure.

Joe Biden, the frontrunner for the Democratic presidential nomination, highlighted the lack of sick leave for many workers as a glaring shortcoming of the US labor system.

“It is a national disgrace that millions of Americans do not have a single day of paid sick leave,” the former vice president said.
(AFP)