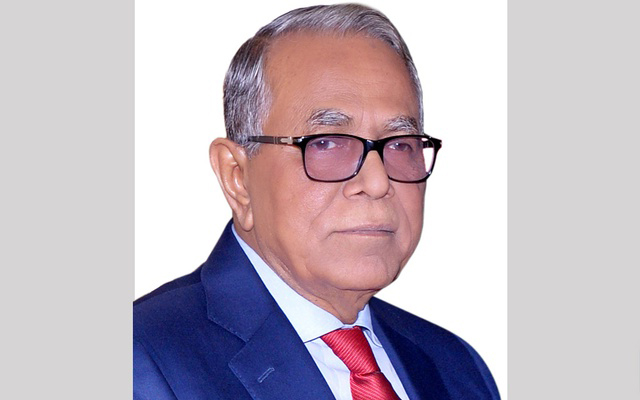 Online desk : President M Abdul Hamid has urged all to work being imbued with the spirit of the liberation war to turn Bangladesh into ‘Sonar Bangla’ by completing the unfinished tasks of Bangabandhu in the ‘Mujib Year’.

“Being imbued with the spirit of the liberation war let it be the pledge in ‘Mujib Year’ to turn our country into ‘Sonar Bangla’ by completing the unfinished tasks of Bangabandhu,” said the President today in a message marking the great Independence and National Day.

Extending his heartfelt greetings to the countrymen on the occasion, the President said Bangladesh will enter into a new chapter-a new horizon as the golden jubilee of the country’s independence will be observed in 2021 with great enthusiasm.


“With the concerted efforts of all, let our beloved motherland be a poverty-free developed one; it is my expectation on Independence Day,” he added.

On the occasion of Independence and National Day, the President remembered with profound respect the architect of independent Bangladesh, Father of the Nation Bangabandhu Sheikh Mujibur Rahman.

He paid deep homage to the millions of martyrs who made supreme sacrifice in the war of liberation and recalled with profound reverence the four National Leaders, valiant freedom-fighters, organizers, supporters, foreign friends and people from all walks of life who made immense contributions to attain the right to self-determination and the war of liberation.

“We have achieved our hard-earned independence through huge sacrifices. Bangabandhu always cherished a dream of building a happy and prosperous country along with attaining political emancipation. Keeping that in mind, the present government has been rendering untiring efforts in materializing the dream of Bangabandhu,” Abdul Hamid said.


Today, Bangladesh is moving towards the highway of development at a tremendous pace, he said, adding that the country has achieved enormous success in various areas of socio-economic development, including poverty alleviation, education, health, human resources development, women empowerment, reduction of child and maternal mortality rates, elimination of gender discrimination and increase in average life expectancy.

Abdul Hamid said the rate of poverty has decreased, per capita income has tripled over the past decade. The construction of the Padma Bridge is also going on in full swing by our own resources and the Ruppur Nuclear Power Plant is underway, he added.

The President said Bangladesh’s achievement in the international arena, including the establishment of world peace, is also commendable and the expatriate Bangladeshis have also been making significant contributions to the national economy by sending their hard-earned remittances.


“Nevertheless, we have to go a long way towards achieving the desired goal of independence. We must ensure good governance, social justice, transparency and accountability to make the development people-oriented and sustainable,” the Presided added.
(BSS)