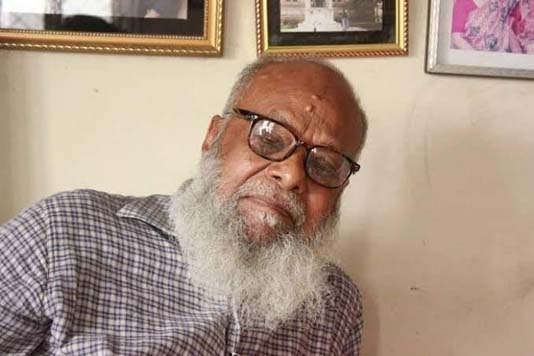 Online Desk ; A nonagenarian aide of Father of the Nation Bangabandhu Sheikh Mujibur Rahman has said the country’s founder had relished Bangladesh’s impendence hours ahead of his arrest on March 25, 1971 night when the Pakistani troops launched their infamous crackdown on the Bengalis.

“From today we are independent,” 93-year-old Hazi Golam Morshed recalled Bangabandhu as saying at the late evening of March 25 as he was virtually acting as Bangabandhu’s private secretary in those days.

Talking to BSS managing editor Anisur Rahman, Morshed, more known as Hazi Morshed in closer circle, on the eve of the Independence Day anniversary recalled that Bangabandhu foresaw his capture before the crackdown began.


But he preferred to stay at his 32 Dhanmondi house defying party colleagues and followers’ repeated requests throughout the day, expecting the Pakistani troops would not ruthlessly attack unarmed Bengalis if they could arrest him, a presumption, which, eventually proved wrong, however.

“They (Pakistani army) are coming to arrest me. (But) I have decided to stay,” Morshed recalled Bangabandhu as saying the words in English.

Morshed recalled that Bangabandhu made his crucial comment around 10:00pm, sitting alone in his room, eyes closed, while Begum Mujib along with their youngest child Sheikh Russel were the lone family members at the house as he earlier sent elsewhere the other family members.

“I conveyed the callers question keeping the receiver in my hand and Bangabandhu asked me to tell him to go into hiding, demolishing he transmitter . . . I still have no idea who the caller was and what his comments meant,” he said.


An ailing Morshed was recollecting his cherished memories of that day half-lying at his bed at his residence near Asadgate in Dhaka and recalled throughout that day Bangabandhu’s met with Awami League leaders and numerous others.

He said even government officials came to seek his directives sensing an ominous scenario but Tabibur Rahman, a student leader, was Bangabandhu’s “last visitor” of the day, who like most others earnestly requested him to go underground to save his life.

“He (Tabibur) hugged him and said ‘Leave the house immediately, they will kill you … (in reply) Bangabandhu said ‘If they don’t get me they will massacre all the people and destroy the city,” Morshed said.

Morshed said he became a fan of his “Mujib Bhai” since the 1946 Azad Hind Captain Rashid Ali Day when Bangabandhu was a student leader in Kolkata. In later years became one his close confides and during the eventful March 1971 he used to stay with Bangabandhu from morning till late night.


He remembered that one of the visitors to the house on that day was police officer MA Awwal, who was the then director of Ansar at that time.

Inside the house Bangabandhu was asking Awami League leader Barrister Amirul Islam where weapons could be found to resist an imminent army crackdown as the leaders were reviewing the situation.

Morshed recalled that Awwal who was on the sidelines of the meeting and proposed Ansar force’s weapons could be used as well informing that their arms were kept in police arsenal in every district.

Student leader Sirajul Alam Khan, however, trashed the proposal, but later Bangabandhu sent Awwal along with Morshed to Dhaka’s the then police superintendent EA Chowdhury to ask him on his behalf to distribute weapons among policemen to resist the impending military crackdown.


Morshed said after 12 midnight, the skyline was glowed with bright lights when Bangabandhu came near him and tried to find out from which side the light was coming, and went upstairs.

He said moments later someone creamed “Hands up” while someone else shouted “mat maro (don’t kill)” as he stood by the telephone set kept near the staircase of the house.

“In a fraction of a second, someone hit me with something on the back of my head and I lost consciousness. That was the last thing I could recall of that night”.
(BSS)