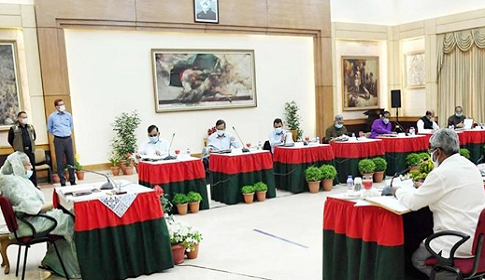 Online desk ; The cabinet today gave a final approval to a draft law by increasing jail terms from six months to maximum seven years for adulterated fish production and marketing to local and international markets.

The approval came in the weekly cabinet meeting held at Ganabhaban this morning with Prime Minister Sheikh Hasina in the chair.

“The cabinet today gave final approval to the draft of Fish and Fish Products (Inspection and Quality Control) Law, 2020 for strengthening monitoring to ensure quality of the fish at production and marketing levels, preventing adulteration,” Cabinet Secretary Khandker Anwarul Islam told a news briefing at Bangladesh Secretariat here this afternoon.

Anwarul added that under the proposed law one would now face jail terms up to maximum seven years and fine up to Taka 5 lakh or both which was only six months and Taka 5000 penalty or both in the law Fish and Fish Products (Inspection and Quality Control) Ordinance, 1983 is being amended.

According to the proposed law, he said, that one will sustain for minimum
five years punishment for production and marketing of the adulterated fish in
the local and international markets.

“The Fish and Fish Products (Inspection and Quality Control) Bill has been
framed for protection and expansion of export markets of Bangladeshi fish and
fish products, and for importing and marketing quality fish and fish products
to local markets,” he said.

Anwarul said the new law would help stop adulteration and maintain quality
of fish and fish products as well as assist to expand their export market,”
he said.

The proposed law made having license mandatory for exporting fish and fish
products, he said.

The cabinet secretary said that license can be revoked on various grounds
such as violation of conditions mentioned in the license, providing false
information or concealing information, failure to renewing license for three
consecutive years, and handing over and selling the license.

The law simultaneously has kept a provision of “administrative punishment”
under which one could be fined up to Taka five lakh for fish adulteration
using any harmful ingredient in producing or preserving the fishes.

Anwarul said the new law prescribed a mandatory provision which would
obligate all fish firms to obtain registration and take health certificate
from authorities concerned for fish trading including exports.

He said the cabinet today also gave final approval to “The Bangladesh
Reference Institute for Chemical Measurements Law, 2020” to facilitate an
already built institute to conduct micro-level test of chemicals.

He said it endorsed “The Bangladesh Reference Institute for Chemical
Measurements Act, 2020″ aimed at facilitating an already set up institute to
smoothly run its activities in measuring chemicals by maintaining the ISO
standard.”

Anwarul said that the Designated Reference Institute for Chemical
Measurements (DRICM) had been established under the Bangladesh Council of
Scientific and Industrial Research (BCSIR) and inaugurated by the Prime
Minister on June 10, 2012 for the development of chemical metrology.

“The draft law has proposed to separate the institute from the
jurisdiction of the BCSIR and establish it as a statuary body under the
Ministry of Science and Technology,” he said.

The cabinet secretary said that the proposed law also recommended to form
a 13-member governing body with representatives of the institute and appoint
a director general (DG) as its chief executive officer (CEO) from the
country’s noted scientists and researchers.

“The government will appoint a director general as the permanent CEO of the
institute from the country’s eminent scientists and researchers having
experiences in the field,” he said.

Anwarul said the activities of Bangladesh Reference Institute for Chemical
Measurements would be providing measurement and reference measurement
services; development, validation and transfer of chemical measurement
methods; providing reference values of chemicals, organic and inorganic
substances in the materials.

The other activities, he said, include introduction of chemical toxicity and risk assessment management based on reference measurements; running chemical measurement science related education; providing research assistance to higher education; and running activities to train up local and foreign trainees.
(BSS)