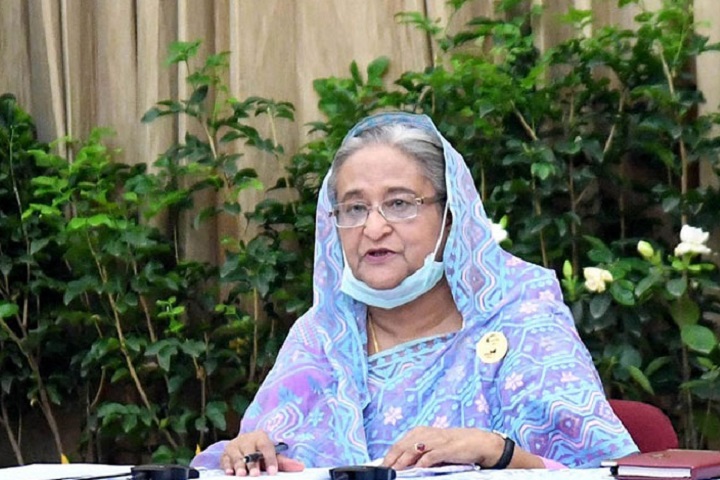 “We’re going to undertake a new scheme of Taka 5,000 crore with maximum five percent interest rate to help small and medium level farmers to raise food production,” she told a video conferencing with public representatives and officials in Khulna and Barishal divisions.

The premier said Bangladesh Bank would formulate the refinancing scheme of Taka 5,000 crore to be disbursed as current capital in the agriculture sector, fixing the maximum interest rate at client level at five percent.

“The rural small and medium farmers will get the loan from the fund and they can use the money in producing agriculture, flower, fruits, fish, poultry etc,” she told the conference from her Ganabhaban official residence here.


Sheikh Hasina simultaneously announced allocation of an increased amount of Taka 9,000 crore as a subsidy in fertiliser in the next budget as part of government strategy to minimize impact of the deadly virus on economy enhancing yield.

The premier exchanged views and issued directives as the public representatives and officials took part in the virtual conference from the 16 costal districts in the two southwestern divisions to review the present coronavirus situation.

The prime minister also declared an allocation of Taka 200 crore for harvesting and mechanisation of agriculture and Taka 150 crore for seeds and seedlings distribution among affected farmers so that they can continue agriculture production.

She said Bangladesh still was an agriculture-dependent country and the current situation demanded enhanced volume and “that i’s why we are taking special measures”.


Sheikh Hasina said the nation now await start of boro harvesting soon while her government would procure extra two lakh tonnes of paddy compared to the last fiscal to ensure fair price for the producers. Sheikh Hasina said Bangladesh Bank is giving credit to the farmers at 4 percent interest rate for producing spices, including onion, garlic, ginger and chilli. “This scheme will simultaneously continue,” she added.

The premier on April 5 declared an allocation of Taka 72,750 crore under a set of stimulus packages to overcome the possible COVID-19 impact on the country’s economy.

On March 25, she announced a Tk 5,000 crore package for paying wages and allowances of workers and employees of the export-oriented industries.

Putting emphasis on increasing food production in the country, the prime minister said the entire world may experience serious food crisis due to the present coronavirus pandemic.

“That’s why we’ve given attention to procure more food grains side by side with enhancing production,” she said.


Pointing out that the soil of the country is very fertile, Sheikh Hasina said: “We’ve land and people, and through increasing food production by utilising the soil properly, we can help others after fulfilling our demands.”

She went on saying: “We’ve to do it so that the people of the country don’t suffer and if needed, we can assist other countries and peoples … you’ll have to produce foods keeping it in mind.”

The premier reiterated her call to all concerned, including the peasants, to utilise every inch of land to increase food production. “All will have to give attention so that a small piece of land doesn’t remain uncultivated,” she added.

Referring to the announcement of various incentive packages for different sectors, including industry and agriculture, Sheikh Hasina said her government is always ready to help the people of all classes, including farmers, workers, day-labourers, blacksmiths, potters, fisherman and weavers.

“We’ve already declared a Taka 72,750 crore incentive package to keep up the production of the industries and trade and commerce in the country,” she said.


She said: “We know that the country’s development work is being disrupted extremely (due to Covid-19 outbreak). But the biggest work is now to save the people and continue their living and livelihood.”

The prime minister said her government has already instructed the authorities concerned, including the law enforcement agencies, to ensure smooth transportation of food grains, milk and other essential goods during the shutdown declared over the coronavirus pandemic.

“Besides, we’ve directed the authorities to reach the people engaged in harvesting to their destinations,” she said.
(BSS)