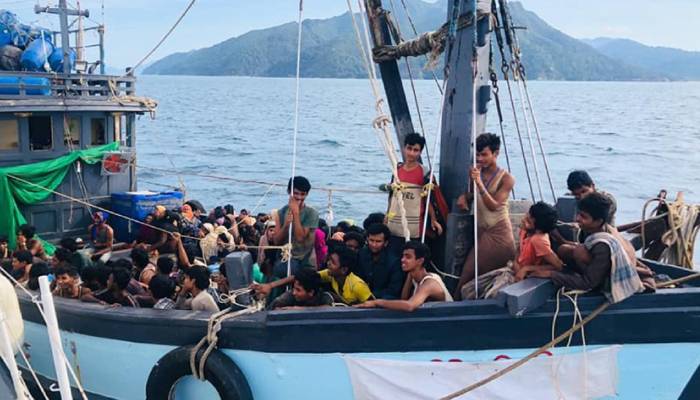 Online desk : The Bangladesh government has sent a letter to the United Nations Secretary-General António Guterres requesting him to take back some 500 Rohingya who have stranded in two trawlers in the Bay of Bengal.

The two trawlers–carrying an estimated 500 Rohingya women, men and children–are in the Bay of Bengal after being rejected by Malaysia, which has imposed restrictions on all boats in light of the coronavirus pandemic.

According to the United Nations refugee agency, UNHCR, the stranded Rohingya might “have been at sea for weeks without adequate food and water.”

Dhaka believes that the UN is now deliberately trying to put the burden of more Rohingya refugees on the shoulders of Bangladesh government adopting various tactics.

On April 15, Bangladesh coast guard officials rescued one boat of Rohingya refugees which had reportedly been turned away by Malaysia nearly two months earlier. About 390 starving Rohingya, most under 20 years old, were brought ashore, with reports that as many as 100 may have died on board before the rescue.

However, on April 23, Foreign Minister AK Abdul Momen said the country would refuse entry to more Rohingya: “I am opposed to allowing these Rohingya into the country because Bangladesh is always asked to take care of the responsibility of other countries.”

Bangladesh hosts nearly a million Rohingya refugees who fled mass atrocities in Myanmar. He added that because the Covid-19 pandemic had increased the number of Bangladeshis returning to the country, “we have no room to shelter any foreign people or refugees.”


“Why should Bangladesh take the responsibility every time? Momen asked. “Bangladesh has already taken more than a million of Rohingya. We are running out of our generosity now.”

The Myanmar government bears responsibility for creating the Rohingya refugee crisis. About 900,000 Rohingya are currently living in overcrowded camps in Bangladesh, most of whom fled Myanmar since August 2017 to escape the military’s crimes against humanity and possible genocide. The estimated 6,00,000 Rohingya who remain in Rakhine State in Myanmar are subject to government persecution and violence, confined to camps and villages without freedom of movement, and cut off from access to adequate food, health care, education, and livelihoods.

“Prime Minister Sheikh Hasina’s government is turning its back on these refugees,” Adams said. “Concerned governments should call on Bangladesh to bring these two Rohingya boatloads ashore and provide generous financial support for these and other refugees living in overcrowded camps.”