Hundreds of workers coming to Dhaka for livelihoods 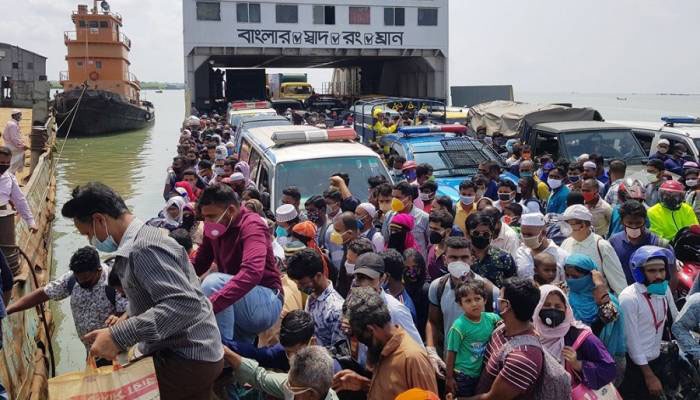 Online Desk : Hundreds of working class of people are heading to their working places in Dhaka, Narayanganj and Gazipur from 21 southern districts of the country.

Though panic of contracting coronavirus infection has gripped the entire country, garment workers are rushing to their working places crossing the mighty Padma river by ferry and engine-driven trawlers from Mawa ferry ghat.


“There were no empty space on the ferries at all. Workers working at different garment factories in Dhaka, Narayanganj and Gazipur reached Shimulia ferry ghat by buses, minibuses and other modes of transport from 21 southern districts of the country,” he said.

However, the BIWTA sources said most of the working class of people crossed the river Padma by engine-driven trawlers instead of ferries.

On the other hand, reaching the Shimulia ghat, the workers started their journeys toward Dhaka and Narayanganj by CNG autorickshaws, autobikes and easy bikes.

Garment workers were facing untold sufferings due to the closure of public transports. Those who could not avail the vehicles started journey on foot amid scorching heat of the sun.

Mawa traffic police in-charge TI Helal Uddin said thousands of working class of people crossed the river Padma by engine-operated trawlers. However, the trawlers forced the passengers to get down on the char areas instead of anchoring at Shimulia ferryghat.


BIWTC’s Shimulia Ghat deputy general manager Md Shafiqul Islam said six ferries have been kept operative on the riverine routes. Most of the passengers crossing by ferries are garment workers. However, they prefer to cross the river Padma by trawlers instead of ferries, he said.