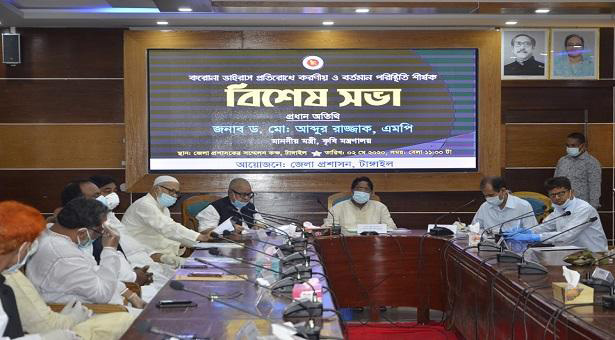 “If the Boro paddy can be harvested properly from the paddy fileds, there will not be any food deficit in the country over the next seven to eight months, rather the country will witness food surplus,” he told journalists responding to a question whether Bangladesh would face any impact as the World Food Programme (WFP) has already expressed the apprehension that 30 million people may die of hunger around the globe due to coronavirus infection.

Boro accounts for more than half of the total 3.64 crore tonnes of rice produced in the country in 2018-2019 fiscal year, Bangladesh Bureau of Statistics data shows.


The Agriculture Minister was speaking at a special meeting at Tangail deputy commissioner’s conference room on Saturday.

Dr Razzak said government has laid strong emphasis on continuation of agricultural production and boost the food grain output in future in the wake of coronavirus onslaught.

“Apart from seeds and fertilisers, different kinds of incentives have been provided to farmers throughout the country at free of cost to produce Aus paddy,” he said.

Aus paddy is a major cereal crop of Bangladesh. The paddy which are sown summer and harvested in autumn every year.

It requires 3,200 liters of water to produce one kilogram of Boro rice, while Aus paddy needs little water. Since it is cultivated in the rainy season, no supplementary irrigation is required.