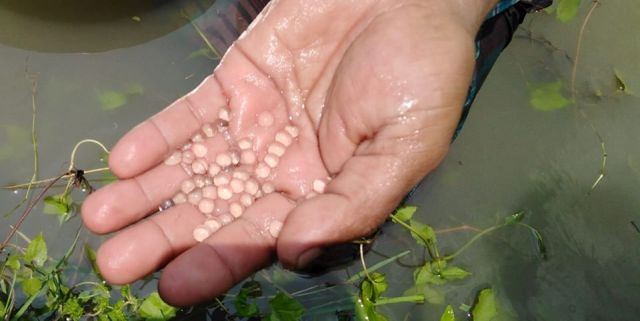 Online Desk : Brood fishes (mother fishes) of different indigenous sweet-water fish species are releasing eggs in the Chattogram’s Halda River, one of the major natural breeding grounds of fish in South Asia.
Due to the upazilla administration’s strict surveillance on the Halda River and the massive release of fry into the river, a large number of mother fish have been observed during the season.


“Over 600 fishermen with 280 boats began collecting the fertilized eggs from the river’s Kagatiyara point to Garduyara Nayahat point, he added.

Farhana Lovely, Halda Research Officer, and other concerned have visited the Halda River, he added.

Ashu Barua, one of the fishermen of Ramdashat area said, “We are collecting eggs with six boats since 12am. After 7 am, a huge amount of eggs are being netted.”

Another egg collector from Halda M Shamsu said, “I have six boats which are being used in collecting eggs. Till 10 am, we have collected six buckets of eggs.”


The temperature of the water, strong currents and thunderstorms are some key factors to create a congenial atmosphere for the brood fish to lay eggs in the river, say experts.

Every year, during the Bengali months of Baishakh and Jaishtha (April and May), different indigenous species of carps like the Catla, Ruhi, Mrigel and Kalibaush etc start migrating to the spawning ground of the Halda from the rivers like the Karnaphuli, Matamuhuri, and Sangu.

Due to the pollution caused by industrial effluents, netting of brood fishes, and sand excavation downstream were destroying Halda’s natural environment and hampering fish breeding that led to a remarkable decrease in breeding till 2017.


However, in recent years as the local UNO has increased surveillance to stop netting brood fish, Halda River is getting back its main natural stream.

Fishermen said that they are expecting a big haul this year as pollution and human activities have dropped significantly in the river.