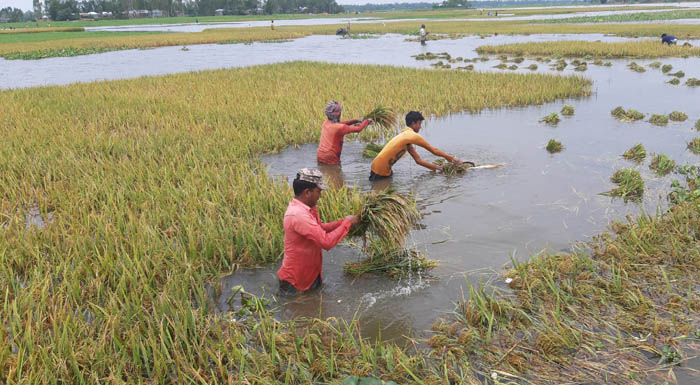 Online Desk : Ripen Boro paddy on vast areas of charland in Kurigram district have been inundated following the rise of water levels in different rivers due to onrush of hilly water and rain.
Farmers have become unable to harvest half-ripen paddy on several hundred hectares of land following the inundation. They have expressed the apprehension that the huge quantity of paddy may subsequently be damaged unless the water is receded quickly from the land.

The farmers of the char areas have cultivated Boro paddy on more than 200 chars along the rivers Brahmaputra and Dudhkumar flowing over Kurigram district. Most of the farmers have not been able to harvest their crops as they sowed BR-29 variety of Boro saplings on their lands making somewhat delay. The unwanted situation has arisen as the monsoon has started much earlier this year.


It is learnt that most of the ripen or half-ripen Boro paddy in more than 200 chars including Porar Char, Majhialir Char, Borua, Rolakata, Bhagabatipur, Parbatipur and Jhunkar Char under Kurigram Sadar upazila, Narayanpur, Kalar Char, and Austoashir Char under Nageswari upazila, Saheber Alga, Jahajer Alga, Dui Khawa and Aimari under Roumari upazila, other chars in Rajibpur and Chilmari upazila have been inundated by onrush of water from hilly region and monsoon rain. In such a situation, farmers are trying to harvest some of their paddy from under the water.

Khoka Mondol of Parbatipur Char in Jatrapur union under Sadar upazila, said he cultivated BR-29 variety of Boro paddy on his five bigha of charland. The entire crop has gone under water due to sudden rise in water level in the river. Of the five bigha of land, paddy on only one bigha of land remains standing, which he stared harvesting hiring workers. The paddy on rest of the land still remains under water.

Aynal Huq of Bhagabatipur Char under Sadar upazila said: “We meet the demand of food of our family with this paddy throughout the year. But, this year we have become unable to harvest even half of the paddy due to unfavourable behaviour of the nature. We’re almost finished.”


Former UP member Shah Jamal of Jatrapur union of Sadar upazila said almost all the BR-29 variety of Boro paddy cultivated at the chars in Jatrapur union and a nearby union have inundated. This huge quantity of paddy is now on the verge of ruination as they have remained under water over the last several days. As a result, farmers in these unions would have to face irreparable losses.

Jatrapur union chairman Ayub Ali Sarker said the farmers of char region could not harvest even half of their produce before the arrival of water. The inundated paddy would get damaged if the water does not recede fast.

He sought cooperation from the government to compensate the farmers due to their losses.

He, however, said he had learnt that the paddy which was cultivated lately in the charlands were inundated only. Work is going on to determine the extent of losses.