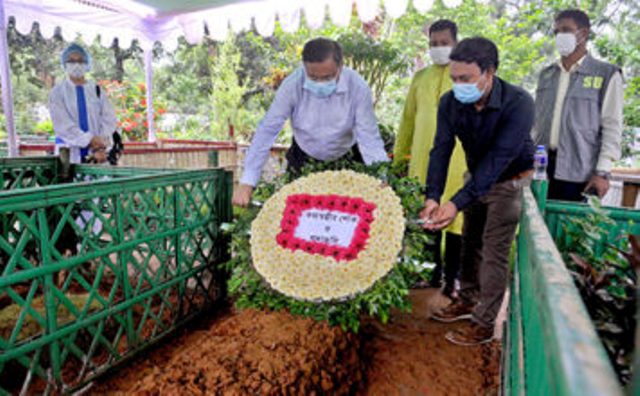 The minister said this after placing floral wreath on the grave of AL presidium member, the central 14-party alliance spokesperson and former health and family welfare minister Mohammad Nasim at Banani graveyard in the capital. Nasim was laid to eternal rest this morning.


Earlier, the information minister offered doa and feteha there on his arrival from Chattogram this noon.

Hasan said Mohammad Nasim, an able successor of martyred national leader Captain Mansur Ali, was not only a leader of AL or a former health minister, but also an eminent politician in the country.

He said the death of Mohammad Nasim is an irreparable loss to the country’s politics and the party. “We lost a dedicated leader in his death and our Prime Minister Sheikh Hasina lost one of her close associates,” he added.

Hasan said Nasim was a tested leader and trusted political colleague. The ideals of Mohammed Nasim in politics will work as an example for the future generation, he added.

He said, “We lost two dedicated and veteran politicians. Sheikh Abdullah, who got involved in politics being inspired with the ideology of Father of the Nation Bangabandhu Sheikh Mujibur Rahman when he was a student, has played a unique role in the struggle of Bangladesh’s freedom by participating in the six-point movement of 1966, mass uprising of 1969 and Liberation War of 1971”.


Even after the independence, he worked throughout his life with patriotism and merit, said Hasan, also Awami League joint general secretary.

The minister said the country has lost honest, courageous and wise leaders at the death of Mohammad Nasim and Sheikh Abdullah.