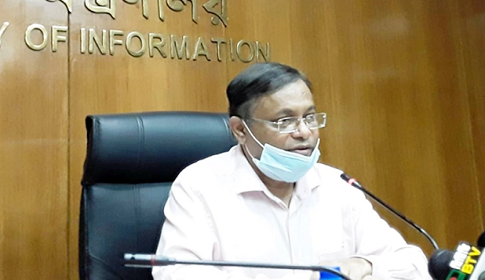 Online Desk : Information Minister Dr Hasan Mahmud on Monday termed many reports of Transparency International of Bangladesh (TIB) as one-sided, flawed and politically motivated, saying the only job of TIB is to look for faults.
“I would like to urge the TIB to compare the present situation between Bangladesh and Germany, where TIB’s head office is located, and also other European countries. Then they (TIB) can realize the situation of Bangladesh,” he said, BSS reports.

The information minister came up with the comments while replying to a query on TIB’s criticism on government’s steps over the ongoing pandemic Coronavirus situation at the meeting room of his secretariat office here.


Hasan said the organization (TIB) never praised the government’s works during the last 11 and a half years. “The TIB told that there was corruption on the Padma bridge construction. The TIB should seek apology to the nation as the World Bank lost in a Canadian court over the graft issue,” he added.

Similarly, he said, TIB proved that they didn’t publish any report after conducting research. “Many of their reports are one-sided and politically motivated to make the government questionable,” said Hasan, also Awami League joint general secretary.

Replying to another query on BNP leaders’ remarks on corona situation, the information minister said the languages of BNP leaders concerning the ongoing pandemic are very much vicious.

“We hope that they (BNP) will take lesson from other countries even from neighbouring India. At the very beginning of the pandemic, Indian opposition leader Sonia Gandhi wrote a letter to the Indian government offering to extend support to the government’s steps. But BNP has failed to do that,” Hasan said.

Terming the situation as war-like, he said Prime Minister Sheikh Hasina didn’t sit for a single moment. “She (Sheikh Hasina) is working relentlessly every day and talking with all concerned at district and divisional levels. She is giving directives to party leaders and also participating in the ongoing parliament session,” he added.


He said, “We all know that we may be affected by the virus at any moment. But we are doing our jobs at offices and party works as well. Besides, we are also supervising our respective constituencies and districts as well.”

The information minister said two late leaders- Mohammad Nasim and Sheikh Abdullah- got affected by Coronavirus for rendering humanitarian works for the people. Besides, other Awami League leaders and activists, who are at the risk of being affected by the virus, are working for common people, he added.

“These incidents proved that our central or grassroots level party leaders and activists and lawmakers as well have been affected with the virus for rendering humanitarian services for the people. We would have to combat the war by maintaining health codes,” Hasan said.


He said the present situation of the country is better than other countries even the developed nations for the government’s relentless efforts. And the government has taken different steps to develop the health services, he added.

The information minister said, “I would request BNP leaders to stay beside the common people shunning the path of vicious politics. By remaining safe, it is not proper to resort to politics that is not expected or normal. The common people would not appreciate these activities. So, let’s get together.”