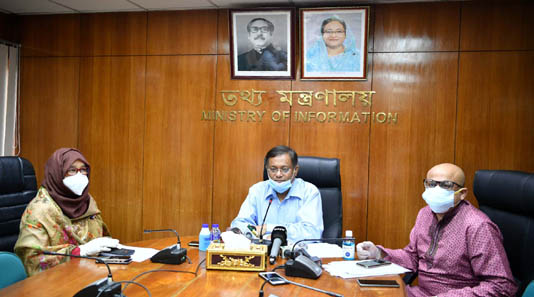 Online Desk ; Expressing his utter resentment over the uploading of obscene and indecent contents on webseries, Information Minister Dr Hasan Mahmud on Wednesday said the government would take legal actions against those publicising illegal and immoral web contents, reports BSS.

“It’s not proper to upload objectionable, indecent contents like pornography and it is a punishable offence as per the video pornography control act, 2012,” he told reporters at a press briefing at the seminar room of his ministry at Secretariat in the capital.

Thanking the media for publishing reports on webseries, the information minister said, as per the act, the people who publicise these types of contents could be arrested and the offender will have to face the highest 10 years of imprisonment.


State Minister for Information Dr Murad Hasan and Information Secretary Kamrun Nahar, among others, were present in the programme.

Replying to a query on indecent scenes of some web series, Hasan said, “We have noticed the matter (pornographyweb series) before media published reports and Bangladesh Telecommunication Regulatory Commission (BTRC) was informed about the allegations that indecent contents were uploaded through two subsidiary companies of two mobile phone operators– Grameen and Robi.”

He said, “At first, we are scrutinising if the organizations have the legal approval to upload these types of contents or not. If they have no legal approval, then it will have to be shut down. Even if they have approval, it is a punishable offence as per the video pornography act for violating the law. So, the government would take legal actions.”


Replying to another query about lockdown and identifying affected zones, Hasan said the works of identifying high, medium and less affected areas are going on. And the concerned authority imposed experimental lockdown at only PurboRazabazar area in the city, he added.

He said, “You all know that, we are passing through a global epidemic. Different developed nations that are in delicate stages have opened their all activities including economic activities for protecting livelihood. A report, published today, showed that Bangladesh is one of the lowest countries in the death ratio among the Coronavirus affected people.”


He said the government is working to identify high, medium and less affected areas. “And the concerned authority declared experimental lockdown in only Purbo Rajabazar area. There is no confusion. Directives will be given if the concerned declares lockdown in anyother area. I would like to urge all not to be afraid and not to spread wrong information which will create confusion among the masses,” said Hasan, also Awami League joint general secretary.