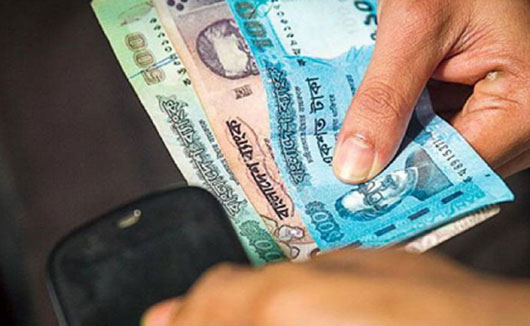 Online Desk : Affluent section are taking advantage of cash disbursement scheme launched by Prime Minister Sheikh Hasina to deal with COVID-19 crisis at Sreemangal upazila in Moulvibazar district while real beneficiaries are getting deprived of it. Reports of irregularities by some dishonest people in the cash assistance distribution were found in the upazila.

A widow wishing not to be named, who is also a tailor, is passing her days in a struggling way with her little income in this coronavirus pandemic period. She lives a rented house in Dakbanglow road area under the municipality but has not been listed yet as the beneficiary of PM’s cash assistance programme. Like the widow, many other destitute alleged to the Observer Correspondent that they are deprived of the government’s assistance.


A list of 9,501 people was prepared and sent to the authorities concerned for approval at the end of May. In the list, it was seen that many affluent people including traders, shop owners, politicians, were included as the beneficiaries. In the list, these affluent people were mentioned as day labourer as their occupation.

Rubina Akter, a beneficiary of the list, told the Observer Correspondent that she has a shop in the town and her name was enlisted as housewife which is false.

When phoned to another beneficiary Monir Mia, a resident of Isubpur village, his wife received the phone call and said her husband is not a day labourer as mentioned in the list and they have a shop at a local market.

No. 3 Ward Sadar UP member Shahjahan Mia said, “There are no irregularities in the list. Most of the people have become jobless during this pandemic. We take the sufferings of people into account this time. We will have to return the money if we consider the professions into account.”


In Municipal area, Nantu Roy’s name was enlisted in the list as day labourer but he is a journalist and known as rich man in the area.

Two brothers in Dakbanglow area have enlisted their names and one of them has already received the assistance while another is waiting for it. The duo have building houses and they are traders at local Saifur Rahman Market though they have introduced themselves as day labourers.

Another resident Sweety Deb who has four houses in the town also enlisted in the list. But workshop worker Chayan Deb, Jayanti Roy and Shopon Roy of the same area are out of the list.


About the irregularities Ward No. 6 Councillor Abdul Karim said, “Many rich people have become helpless due to the lockdown. We enlisted their names taking this issue into account. Every poor has received the government incentive card.”

Sreemangal UNO Nazrul Islam said he is not aware of the irregularities in the list. Proper steps would be taken if anything wrong happened with the list, he added