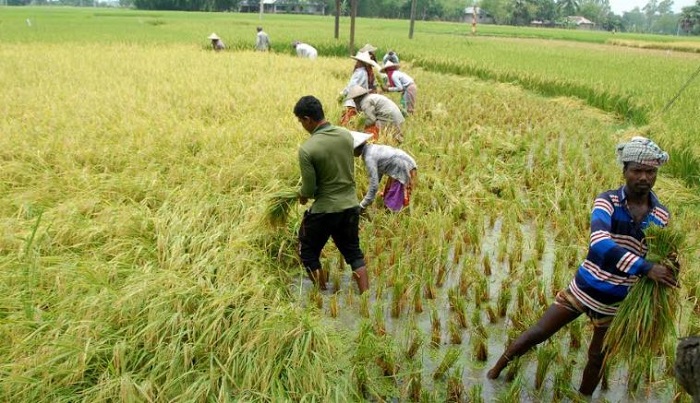 Online Desk : Farmers at Rajshahi’s Tanore have been facing difficulties in cutting, beating and thrashing their Boro paddy due to incessant rain over the last several days.

They are not finding labourers though they are willing to pay extra wages. Not only the farmers, but also the labourers face difficulties in cutting and thrashing the paddy.

It is learnt that two varieties of Boro paddy are cultivated in Tanore upazila. However, farmers have already harvested advanced varieties of paddy. Most of the advanced Boro paddy is cultivated in Beel Kumari. Farmers were able to harvest those paddy during the dried weather condition and got better output of rice.


Farmers in village Gollapara under Tanore said on Sunday that they had to cut their rice in inclement weather and drizzle, and thrash the wet paddy in the machine. Husks of the paddy have spoiled. They couldn’t dry their wet paddy due to lack of sunshine after thrashing.


Tanore upazila agriculture officer Shamimul Islam said Boro paddy has been cultivated on 13,150 hectares of land under the upazila this year. Farmers have already harvested advanced variety of paddy. They also got good output. Cutting of paddy in the potato farming land has just started. However, farmers are facing difficulties in cutting their paddy due to incessant rain.