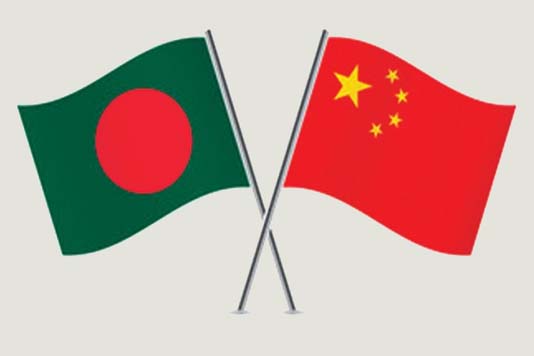 Online desk : A senior Chinese diplomat in Dhaka has reassured Bangladesh’s priority access to a prospective COVID-19 vaccine as their researchers appeared to have reached in an advanced stage in developing inoculates amid a global vaccine race while speculations are growing over their availability to poorer economies.
“As a close neighbor and strategic partner, Bangladesh will be among the first countries to receive the vaccines from China,” Minister Counsellor and Deputy Chief of Mission at the Chinese Embassy in Dhaka Hualong Yan told BSS on Sunday.


His comments came hours after Beijing said an institute of Chinese Academy of Medical Sciences launched a second phase human trial of a possible coronavirus vaccine aimed to fix the shot’s doses and evaluate further its effectiveness and safety.

“An inactivated COVID-19 vaccine candidate developed by the Institute of Medical Biology under the Chinese Academy of Medical Sciences has entered phase-2 clinical trials in China,” the state-run Xinhua reported.

Yan earlier on Sunday made a near identical comment during an online briefing for Bangladeshi diplomatic correspondents along with a visiting Chinese medical delegation called to share their experiences.

China’s state-run Xinhua news agency said an inactivated COVID-19 vaccine candidate developed by the Institute of Medical Biology under the Chinese Academy of Medical Sciences entered phase-2 clinical trials to “further evaluate the immunogenicity and safety of the vaccine in humans”.

The institute called IMBCAMS in May started the phase-1 clinical trials while the “study was randomized, double-blind and placebo-controlled”.


The Xinhua report said the institute had rich experiences and strong capabilities in vaccine research as it previously developed and produced attenuated live vaccines and inactivated vaccines against polio, “shielding hundreds of thousands of Chinese children from being disabled”.

The development came two days after China’s private Sinovac Biotech Ltd said it expected to complete the last phase of its prospective COVID-19 vaccine before November claiming the inoculate to have proved “safe and effective” on human so far.

About a dozen vaccines are in different stages of human tests globally, while Chinese researchers appeared as forerunners alongside their western counterparts and drug makers.

None of the vaccine trials, however, have passed large-scale, late-stage phase 3 clinical trials, a mandatory step to avail regulatory approval for sale.


Regulators and experts in the US and Europe, however, said the emergency situation could allow the interim use of a prospective vaccine or vaccines ahead of an official go-ahead clearance.

Chinese Ministry of Science and Technology said so far, they allowed five COVID-19 vaccine candidates for clinical trials in the country, “accounting for 40 percent of the total vaccines in clinical trials worldwide”.

The world now visibly witnesses an accelerated race for a vaccine or vaccines as the World Health Organization (WHO) warns the coronavirus pandemic is accelerating and “the world is in a new and dangerous phase”.

The coronavirus, which was first detected in China late in 2019, has infected 8.81 million people globally and killed more than 460,000 people.


The WHO said it expected millions of doses of vaccine doses to be produced by the current year and predicted 2 billion by 2021 while initial doses would be targeted to the most vulnerable people.

The world’s leading drug companies, universities and governments are racing to develop a vaccine or vaccines against the coronavirus and halt the global pandemic.

Wealthy countries are placing orders for the treatment before it is even approved as the race for vaccine development intensifies, leaving questions about whether developing nations will get any vaccines in time to save lives.

The British government said that if the Oxford vaccine proved effective, the first 30 million doses would be for Britons while AstraZeneca separately signed deals to make at least 300 million doses available for the US and another 400 million for European Union members.


Beijing earlier promised to make universal its prospective vaccines while vaccine developers in the country also said they were unlikely to keep the shots for China alone.

Sinovac earlier said it alone stood ready to manufacture 100 million doses but it appeared uncertain how quickly other countries would have access to the vaccine if it proves successful while China’s own population currently stands at nearly 1.4 billion.