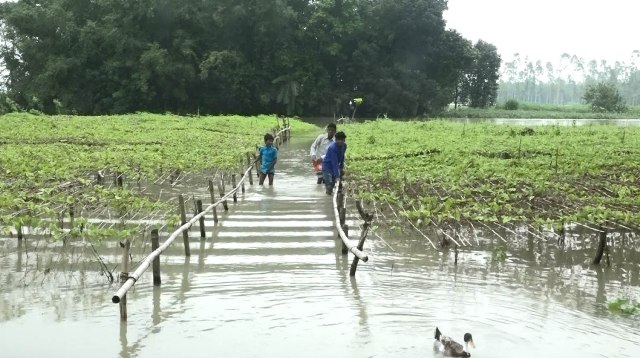 Online Desk ; Thousands of people in Kurigram district marooned as flood situation worsen further in the district. The Brahmaputra River is flowing 72cm above the danger level at Chilmari point and 60cm at Nunkhawa point, while the Dharla River 71cm at Setu point and the Teesta River at 15cm
More than 250 char lands in eight upazilas including Chilmari, Ulipur, Sadar, Rowmari, Rajibpur and Nageswari have been inundated and thousands of people in those upazilas have become marooned.

Communications in the flood affected areas have collapsed and people are taking shelter on high land areas.

Many people of the flood-hit areas have been facing acute shortage of cooked food and pure drinking water.

Zaman, a resident of Vagabatipur Char under Sadar upazila, said all the houses at char areas and 3,622 hectares of crop lands submerged by onrush of flood water.

“I along with my family members have been facing great sufferings and hunger. There is now place to take shelter here,” he added.

Farmer Majid of Panchgachi union parishad said he cultivated aubergine and other vegetables on two bighas of lands but inundated.

Department of Agricultural Extension deputy director Dr Md Mostafizur Rahman Pradhan said cultivated lands of different areas in the district are being inundated by water everyday as the water level of rivers continue to rise, causing a huge losses to farmers.

Kurigram WDB executive engineer Md Ariful Islam said the water level of the Dharla and Teesta Rivers may decrease in the next two to three days but it will continue to rise in the Brahmaputra River.