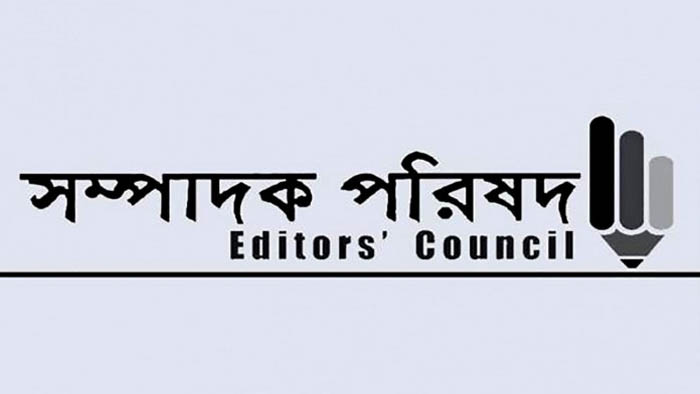 Online desk : The Editors’ Council has condemned the recent spate of cases and arrest of journalists, writers and academics under the Digital Security Act (DSA) for expressing critical views about mismanagement in dealing with Covid-19.
In a statement on Tuesday, the Editor’s Council expressed grave concern over the deteriorating environment for free and independent journalism and increasing instances of police action against media professionals.

In the last few months, nearly 40 journalists have been charged under the ‘controversial law’ and 37 of them have been arrested.

These arrests have created an atmosphere of fear and intimidation making normal journalistic work ‘extremely risky’.

This attack on journalists and the media is occurring when Bangladesh, that is fighting the Covid-19 pandemic, needs reliable and independent media the most to protect itself from fake news and panic generated by misinformation.

Bangladeshi media is playing a vital role in keeping the people informed, publishing news of successes and hope, pointing out inadequacies of our pandemic response, and facilitating public dialogue to map out our course for rebuilding. An attack on the media at this time is to endanger our possibility of stable recovery.

“We also notice with deep concern that the DSA has become a most frequently used law when more time tested laws to dispense justice exist in our statutes.

“This is because under the DSA police can arrest without warrant and most of the provisions (14, out of 20) are non-bailable which ensures the person arrested remains in jail,” the statement reads.

These reasons for arrest are by definition vague and subject to wide and arbitrary interpretation.

The DSA empowers the police to arrest on suspicion and without warrant. Out of its 20 provisions of punishment 14 are non-bailable and as such whenever a case is lodged police promptly arrests and when an accused is brought before a magistrate he or she is almost automatically sent to jail.

Editors feel that the DSA has become a plaything in the hands of a vested quarter who use this anti-press and anti-freedom of expression law whimsically and at will to harass and intimidate journalists and to prevent them from exposing corruption and misuse of funds that the government is presently allocating for the people, especially the poor.

From the outset, Editors’ Council opposed this law as we knew of its evil consequences on free media and freedom of speech.

At that time the law minister assured the media that the DSA was enacted only to prevent cyber-crime and will never be used to curtain freedom of the press.

Statistics show that more journalists, teachers, and intellectuals have been arrested under DSA than cyber criminals, especially in the last six months.

Given our original objection and the experience of the last two and half years we are more convinced than ever that the DSA must be scrapped if freedom of speech and freedom of the press is to have any meaning.

“We also demand the immediate release of all journalists arrested under the DSA and withdrawal of cases against them and measures be taken against them who have blatantly misused this law for vengeance and personal gains,” the statement said.

Editors also demanded that use of the dreaded DSA against the media and journalists must be stopped immediately, and also urged the parliament to take expeditious steps to remove this anti-freedom law from our statutes.