No relief for flood-hit Kurigram people as Dharla, Brahmaputra swell 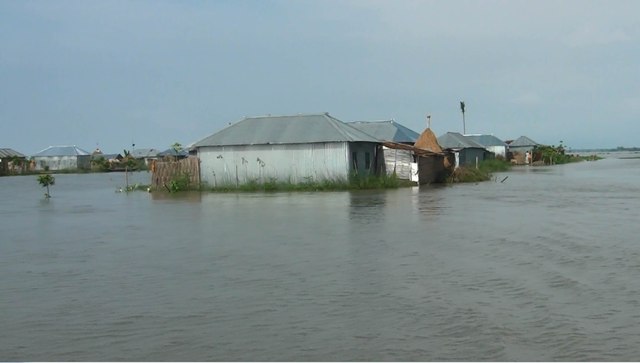 Online Desk ; No respite for thousands of chars and low-lying inhabitants in Kurigram district as water level of the rivers Dharla and Brahmaputra are flowing above the danger level for 11-day.

WDB executive engineer Md Ariful Islam said the Brahmaputra was flowing 25 cm above danger level at Chilmari point while 19 cm at Nun Khawa point; and the Dharla River was flowing 58 cm at 3.00pm on Saturday.

The water level may continue to decline in next two to three days while it would increase in upcoming days, he added.

Areas adjacent to Brahmaputra, Dharla, Teesta and Dudhkumar rivers are fell the victims of river erosions.

People turned jobless due to the flood and now facing immense sufferings due to dry foods and pure water crisis. Baby and cattle foods also made an extra burning among the flood-hit people.

Md Belal Hossain, chairman of Begumganj UP in Ulipur upazila, said 3,000 families in his union badly affected by the flood and are in shortage of food.

“We received only 300 food packs from the government but this is not enough,” he added.Twenty-seven medical team is working in the flood-hit areas to provide necessary health treatment, said the district civil surgeon Dr Md Habibur Rahman.