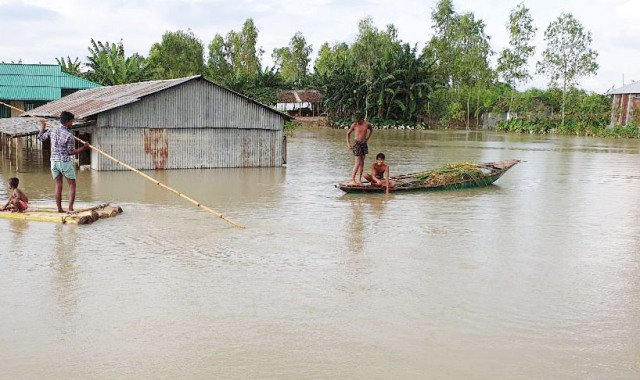 Online desk : The overall flood situation in Bogura has improved slightly but most of the flood-hit people in the district are not able to return to their homes anticipating fresh flood.

A total of 18,000 affected people in Dhunat and Sonatala upazilas have received relief materials.

Sariakandi upazila project implementation officer Sarwar Alam said about 14,000 families in his upazila were badly affected by the flood.

“Residents of Sonatala, Sariakandi and Dhunat upazilas have begun returning to their homes as flood situation has improved. But most people of the upazilas are not able to return their homes as their homesteads are still either under flood water or covered by widespread mud,” said the executive engineer.

Of the residents, some are staying at embankment areas as they are afraid of new flood in the coming days.About 180 metric tons of rice was distributed in Sariakandi upazila as relief items.