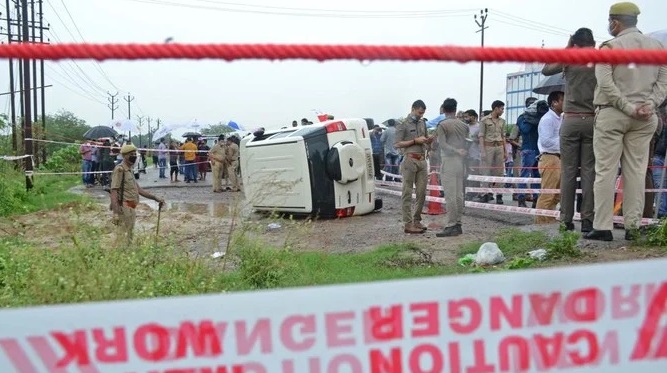 Online Desk : Indian police shot dead one of the country’s most wanted gangsters on Friday just a day after his dramatic arrest, sparking accusations of a staged extrajudicial killing, reports AFP.
Officials said Vikas Dubey, detained for the killing of eight police officers, was shot as he tried to escape a police vehicle while being driven to his home city in the northern state of Uttar Pradesh.

Within hours of TV stations carrying images of his bloodstained body lying in a hospital, rights lawyers and activists alleged that police had killed Dubey to prevent him revealing his connections with powerful people.

“This is the most blatant case of extra-judicial killing. Dubey was a gangster terrorist who may have deserved to die. But (Uttar Pradesh) police have killed him to shut his mouth,” Supreme Court lawyer Prashant Bhushan wrote on Twitter.

“Will we allow police to kill anyone without a court trial?” Utsav Bains, another Supreme Court lawyer, added.

Dubey, aged about 50, was accused of more than 60 murders, attempted murders and other crimes. He was said to have shot dead an Uttar Pradesh state minister inside a police station in 2001.

Despite those cases and his reputation for ruthlessness, Dubey has built considerable local political links over the past two decades.

On July 3, eight officers were gunned down when his gang staged an ambush on a police team aiming to arrest him.

A nationwide manhunt was launched, during which five of Dubey’s associates — including his bodyguard nephew — were killed.

Police said he was tipped off about the deadly raid by local officers, some of whom have been arrested for leaking information to the gangster.

He finally gave himself up in a temple in Madhya Pradesh state on Thursday.

According to the police account, the car transporting him early Friday overturned on a wet road in neighbouring Uttar Pradesh and he tried to escape.

“Dubey has been killed in an exchange of fire after he snatched the pistol of our men and tried to flee after firing at them. Four of our men are also injured,” Kanpur police inspector general Mohit Agarwal told reporters.

Yogi’s government has pledged to root out crime from the state and his tenure has coincided with a surge in the number of criminals dying in police shootouts.