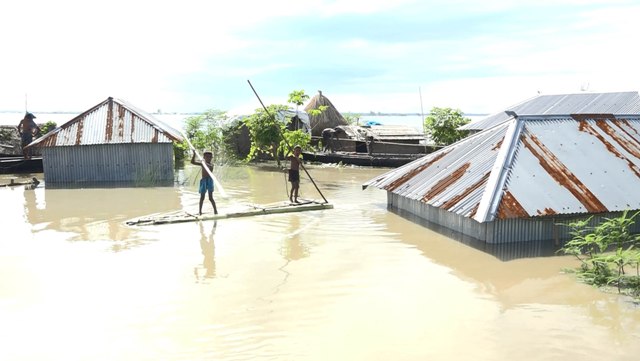 Online Desk : More than two lakh flood-affected people in Kurigram district face untold sufferings due to lack of cooked food and pure drinking water as there is no sign of respite from the flood.
Kurigram Water Development Board (WDB) executive engineer Md Ariful Islam said the Brahmaputra river was flowing 101cm, 94cm above the danger level at Chilmari and Nunkhawa points respectively while the Dharla River was flowing 77cm above the danger level at Setu point.

The ongoing relief activities of the government in flood-hit 250 char lands and low-lying areas are not sufficient and non-government organisations (NGOs) are yet to start their activities among the flood-hit people. Acute shortage of fodder and baby food have also appeared in the flood-affected areas.

Road communications has totally collapsed in Moshal, Baladova, Fakir, Batuatuli, Shaheber Alga, Kashia, Cheragi Chars in Ulipur upazila, and people of these areas are using boat as one medium of communication. Residents of the areas have taken shelters on high lands and embankment areas. They are passing days with one mill in a day or starving due to the shortage of foods.

Kalimuddin, a resident of Mashal Char, said his house has remained submerged under water and he has received no assistance from anyone in the last 20 days.

Mashal Char UP member Jamal Uddin said more than 300 families of his ward have been surrounded by water over the last 20 days and they have not received any kind of relief goods from the government or NGOs.

“Just today I have received rice as allocation which is sufficient for 30 to 35 families and I will distribute the rice among them soon.”