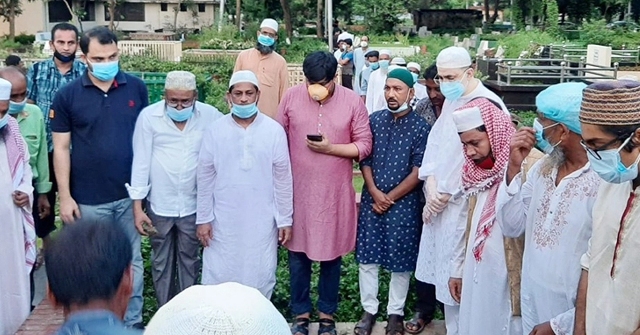 He was buried at his late wife’s grave at about 7:00pm, said BNP Chairperson’s media wing official Shairul Kabir Khan. Earlier, his first namaj-e-janaza was held at Masjid-e-Munaware, neat to his residence at Kataban area after Jumma prayer. Afterward, the BNP and its associate organisations paid tributes to the late academician placing wreaths on his coffin.

Besides, student leaders of the 1990s took part in the namaj-e-janaza.

Professor Emajuddin Ahmed, a former vice-chancellor of Dhaka University, was born on December 15 in 1932 in Maldaha and his family moved to Chapainawabganj after the partition of India. He then passed Intermediate and Bachelor’s from Rajshahi College. He stood first class first in graduation. Then he admitted to the Department of Politica Science at Dhaka University and did his post-graduation from there in 1954. Professor Emajuddin also served as principal at two colleges.

Meantime, he did another Master’s degree in English Literature from Dhaka University in 1961.

After completing higher studies abroad, Professor Ahmed joined the Political Science Department of Dhaka University in 1970. He did his PhD from Queen’s University of Canada in 1977. He was a senior fellow at Heidelberg University of Germany and State College University of the United States in the 1980s.

Professor Emajuddin served as the 21st vice-chancellor of Dhaka University, from 1992-1996. He continued teaching after his retirement in 1998. He wrote more than 50 books in both Bangla and English. He also represented Bangladesh at the 41st Session of the United Nations. More than 100 of his write-ups have been published in local and foreign journals.

He was awarded the Ekushey Padak in 1992 in the field of Education. Professor Emajuddin Ahmed left two daughters and two sons to mourn his death.