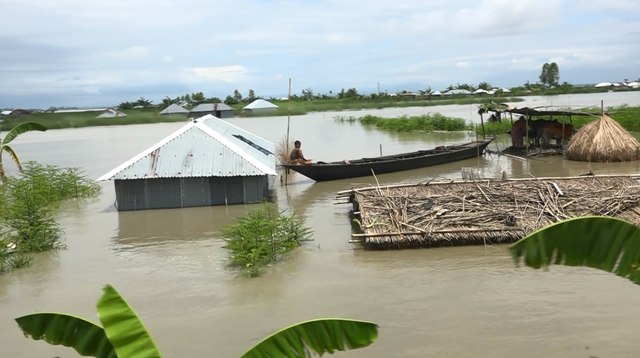 online desk : Dudu Mollah with his family members has been passing days and nights through immense sufferings on boat, his new temporary address in this flood time.
Expressing his dissatisfaction, Dudu Mollah, one of the flood-affected people at Ulipur upazila in Kurigram district, said, “No relief has come here. Even one, out of 10, is not getting it. We are surviving on muri and chira (puffed and crushed rice) only.”

Jamar Uddin, a resident of Mashaler Char, said he along with his family has been floating on boat over the last three weeks. “No food to eat or no water to drink. Our miseries have no limit,” he added.

Though the water levels in the Brahmaputra and Dharla rivers have fallen somewhat, they are still flowing above the danger level.

Water Development Board executive engineer Md Ariful Islam said the Brahmaputra River is flowing 84cm, 72cm above the danger levels at Chilmari and Nunkhawa point, while the Dharla river is flowing 56cm at Setu point.

Especially, people of low-lying areas who are living on their boats have become worst sufferers. About 2 lakh people of 250 char areas under nine upazilas are in trouble due to lack of cooked foods and pure drinking water.