BNP stood against people by closing down community clinics: Hasan 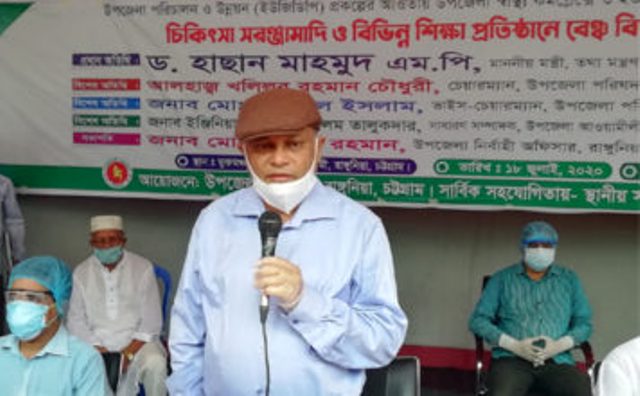 Online Desk : Information Minister Dr Hasan Mahmud today said that Bangabandhu’s daughter Sheikh Hasina started community clinics in 1996 to provide healthcare services to the people after she was given the responsibility of running the country for the first time.

“But sadly, the truth is that after the BNP came to power under the leadership of Begum Khaleda Zia, they closed down the community clinics introduced by AL. BNP did not care for the people and they stood against the people,” he added.
Hasan said that Sheikh Hasina is delivering healthcare service to the people through community clinics.

“Not only healthcare but also 30 types of medicines are being distributed free through community clinics. Neighboring countries including India, Nepal and Pakistan do not have such system,” he added.

He was speaking as the chief guest while distributing medical equipment and 25,000 tree saplings for the Upazila Health Complex and community clinics at the union level under the UGDP project held at the Rangunia Shilpakala Academy this evening.

Hasan said that a conference of regional health ministers was held in Bangladesh a few years ago. There, the Indian health minister frankly acknowledged that many countries could learn from the way healthcare is being delivered to people through community clinics and free medicines are being distributed here, he added.

Information minister said the present government of Sheikh Hasina has taken initiatives to distribute healthcare items to strengthen the community clinics to provide better healthcare to the people. At the same time, the Prime Minister has made school education free for children and adolescents and introduced free education up to degrees for female students, he added.

Hasan, also joint general secretary of Awami League, said that no mother in Bangladesh ever thinks that when her child goes to school, money comes to her mobile phone.

“One and a half crore mothers in Bangladesh get money on mobile phones because their children go to school. I don’t know if it is introduced in any other country in the world,” he added.

The information minister said the government has also taken various initiatives to build a new generation side by side building Bangabandhu’s dreamt golden Bangladesh.

The AL joint general secretary said that Prime Minister Sheikh Hasina has been tackling the coronavirus with the right leadership since the outbreak of the virus in Bangladesh.

“That is why, Bangladesh has one of the lowest coronavirus mortality rates in the world. Corona mortality in Bangladesh is lower than in China and India-Pakistan,” he added.

The information minister said Prime Minister called upon all to work together to tackle the corona pandemic. “I would like to thank and appreciate those who have extended their hands to the government. If we work together, we can deal with any disaster together,” he said.