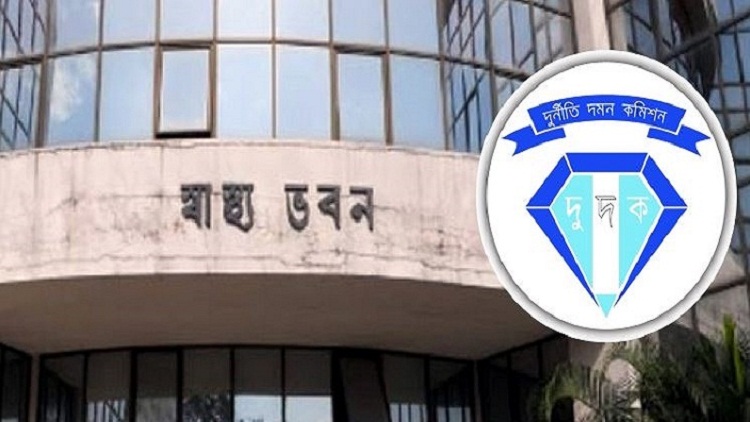 Online desk : A team of the Anti-Corruption Commission (ACC) has suddenly gone to the office of the Directorate General of Health Services early Sunday afternoon.
They entered the Health Bhaban at Mohakhali in the city at 12:45pm and came out of the building at about 3:30pm.

Abu Bakar Siddique later told journalists that they sought some documents related to Regent Hospital appearing at the DGHS in person. “But, they didn’t give us those documents. They rather said that they would send the records to the ACC office on Monday,” he said.

Asked whether they had found anomalies in Regent Hospital related information, the ACC team said it was difficult to say anything else exactly and clearly until and unless “we receive the entire documents in hands.”

“However, we’ve found soma anomalies. The Regent Hospital took money from people coronavirus tests though they were not supposed to do that. In fact, we’ll be able to tell details after examining the records from the DGHS,” he said.

Earlier on July 13, the anti-graft watchdog decided to probe the wealth of Regent Hospital and its chairman Md Shahed alias Shahed Karim accumulated in unlawful ways. The probe began through the special information department of the commission. A three-member committee was also formed. Led by the commission’s deputy director Md Abu bakar Siddique, other members of the probe body are Neyamul Hasan Gazi and Sheikh Md Golam Mowla.

On July 7, the RAB mobile court sealed off Regent Group’s head office, and two branches of Regent Hospital–one at Uttara and the other at Mirpur. Its chairman Md Shahed was arrested early in the morning on July 15 from the Labangabati river bank’s frontier area at village Komorpur under Debhata upazila in Satkhira district.