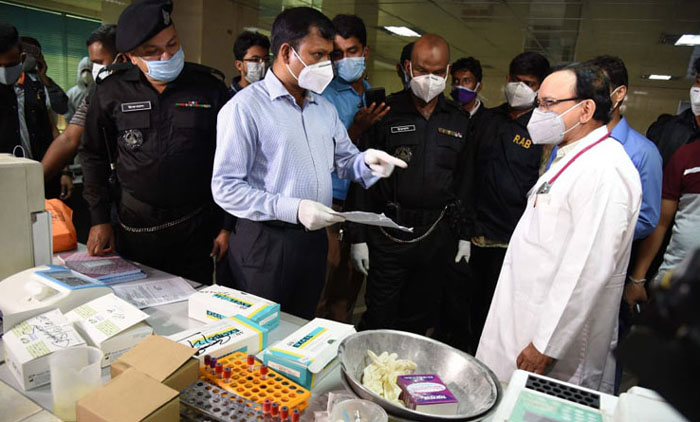 A RAB mobile court led by Executive Magistrate Sarwar Alam, conducted the raid at the hospital from 3:00pm to 10:00pm.

“The patients admitted here would be shifted and it would be sealed off. A regular case would be filed against the hospital managing director and directors and others for forgery and other irregularities,” said the RAB executive magistrate after the raid. He also added that the hospital’s license had expired a year ago and it had been involved in many other offences.

At least 14 COVID-19 patients were receiving treatment at the private facility and the hospital charged them extra, besides making claims to the patients that they conducted some tests multiple times without actually carrying out the tests, according to the RAB.

RAB executive magistrate Sarwar Alam led the mobile court that raided Shahabuddin Medical in the afternoon after a tip-off regarding COVID-19 test irregularities.

Sarwar Alam told reporters that they found that the hospital did not have any PCR lab for testing COVID-19 samples, but they were carrying out tests with rapid testing kits, which did not receive permission from the authorities concerned.

When approached, the hospital officials could not give proper explanation about COVID-19 testing and the sources of these kits, said Sarwar.

Officials first said that they collected these kits from local sources and then also claimed that they imported those kits, he added.

Sources at the Directorate General of Drug Administration said that they seized 20 rapid testing kits and some COVID-19 test reports, which might have been done by using the unauthorised kits.

Hospital assistant director Md Abul Hasnat told reporters that they were using these kits for the purpose plasma donation and these were collected from Gonoshasthaya Kendra for trial.

Few days earlier, the government had suspended permission to conduct COVID-19 tests in five private hospitals and diagnostic centres, including Shahabuddin Medical, in the country.

The other hospitals are CARe Medical College, Stemz Healthcare, and Thyrocare Diagnostic in Dhaka, and Epic Health Care in Chittagong.

The medical director Monsur Ali admitted to the fact that their permission was suspended. He, however, claimed that the kits in use were imported and he was unaware that they were being used.

RAB officials said that the hospital authorities had been deceiving patients since April in the name of detecting COVID-19 infections using the unauthorised rapid test kits.