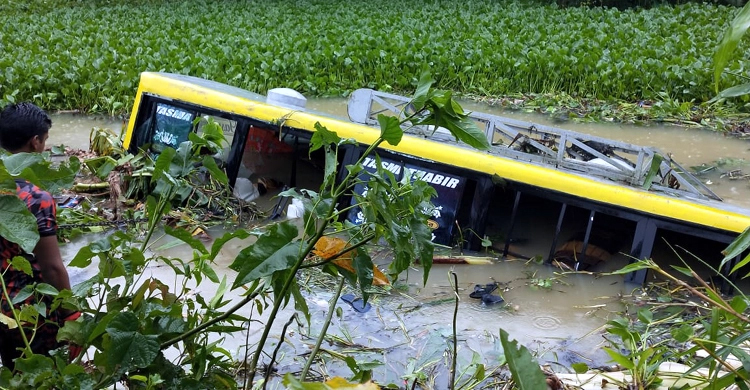 Online desk : Six people have been rescued from a bus that plunged into a canal in Sadar upazila of Sunamganj on Tuesday morning.The bus plunged into the canal in Janigaon area under Lakshmanshree union as its driver lost control over steering.

Four passengers, who managed to come out of the bus, told media that at least 25 passengers were inside the accident riddent bus.

On information, three units of Fire Service from Sylhet and Sunamganj rushed to the spot and conducted rescue operation.

Fire Service officials informed divers rescued seven people, but none was found inside the sunken bus. Later, the rescue operation was called off.

District Bus-Minibus-Microbus Owners’ Association president Mozammel Haque said six passengers were on board the bus when it fell into the canal.

The passengers were rescued and admitted to the hospital as they received injuries, he said adding that the bus driver and helper fled the scene.

Sunamganj DC M Abdul Ahad said, “We visited the spot. Six received injuries in the bus accident and were admitted to the Sadar Hospital. Of them, three were released. No body was found on the spot.”