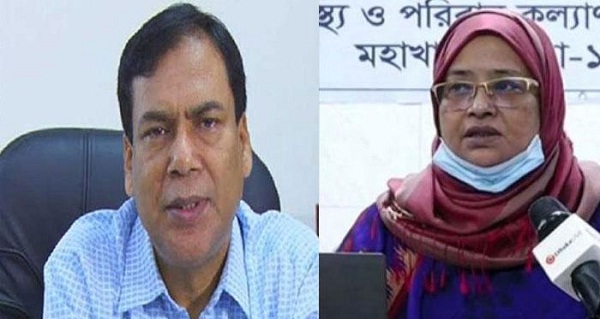 Online Desk ; The Detective Branch of Dhaka Metropolitan Police (DMP) has questioned newly resigned DGHS Director-General Professor Dr Abul Kalam Azad and Additional Director-General Professor Dr Nasima Sultana in connection with giving approval of coronavirus test to JKG Health Care.
The DB sources said a team of the detectives led by DB’s deputy police commissioner Golam Mostofa Russel went to the DGHS at about 4:00pm on Wednesday where they questioned two top officials of the DGHS for over an hour.

The DB sources said they found some irregularities in the process of approval of coronavirus tests to the JKG Health Care.

Besides, they received some information after the arrest of six JKG Health Care officials including the CEO Ariful Chowdhury and his wife Dr Sabrina Arif.

Two top officials of the DGHS were questioned in this regard.

DB’s Joint Commissioner Mahbub Alam told reporters that they sought some documents from the DGHS related to giving approval of coronavirus tests to the JKG Health Care. Later, the DB went to the DGHS after they were called in. After collecting necessary information, the two officials were questioned.

It is learnt that the JKG Health Care’s staff used to visit the residences of people who phoned on their hotline numbers for collecting samples. Foreigners were used to charged 100 US dollars or Tk 8,500, while the Bangladeshi nationals needed to pay the maximum Tk 5,000 per person though the JKG Health Care was supposed to collect samples at free of cost as a charitable organisation on the basis of the approval of the Ministry of Health.

Following the incidents, the DGHS cancelled the JKG Health Care’s approval of collecting samples on June 24.