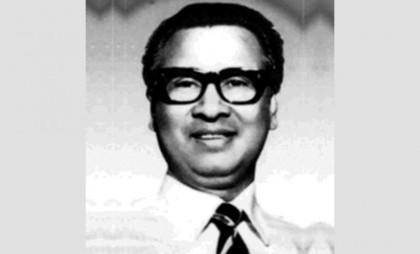 Tajuddin Ahmad was born in Kapasia of Gazipur on July 23, 1925. With three other top Awami League leaders, Tajuddin Ahmed was assassinated inside Dhaka Central Jail on November 3, 1975.

Tajuddin led the provisional government during the Liberation War in 1971. He is regarded as one of the most influential and instrumental figures in the birth of Bangladesh.

A close confidante of the country’s founding president Sheikh Mujibur Rahman, Tajuddin was the general secretary of the Awami League in the late 1960s and early 1970s.

He coordinated Awami League’s election campaign in1970, in which Awami League gained a historic parliamentary majority to form government.

In the subsequent cabinet, Tajuddin was given charge of the ministries of finance and planning. He was also appointed member of the committee in-charge of drafting the constitution of Bangladesh.

In 1974, Tajuddin was removed from his ministry.