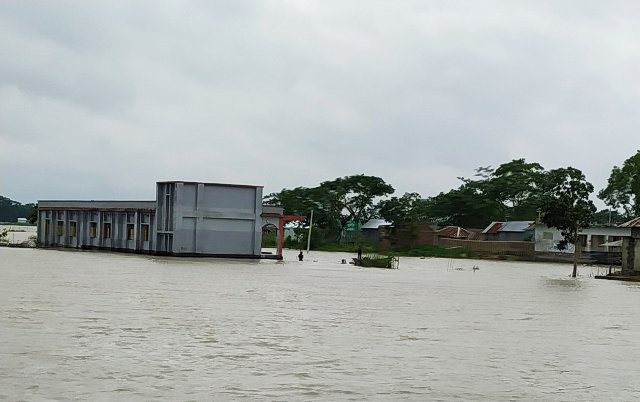 Online Desk : The flood situation in Shariatpur has further deteriorated on Thursday as the water in the river Padma was flowing 35cm above the danger level at Sureswar point in Shariatpur.
Six lakh people of Sadar, Naria, Jajira and Bhedarganj upazilas including four municipalities marooned.

The people of char areas of the district have already taken shelter at different educational institutions.

Meanwhile, the Shariatpur-Mawa road, the only means of communication with Dhaka by road, has been submerged in 2 to 3 feet of water at various places. As a result, people coming from Dhaka to go to different upazilas including district town are suffering a lot. Passengers are crossing various places on the sunken road by small boats.

In this regard, Shariatpur District Bus Owners Association president Faruk Ahmed Talukder said all types of transport movement were suspended on the road from Wednesday evening to avoid risks and damages as Shariatpur-Mawa road was submerged.

The Shariatpu-Chandpur ferry service was being disrupted as the pontoon sank in the flood waters.

According to district administration sources, 470 metric tons of food aid has been received in the district and 298 shelters have been opened for flood victims.

Shariatpur-1 MP Iqbal Hossain Apu has been continuing to distribute relief including rice, pulses, salt, oil and dry food in flood-hit areas of different unions under Sadar and Jajira upazilas. So far, he has distributed 150 metric tons of food items to 30,000 flood-affected families.