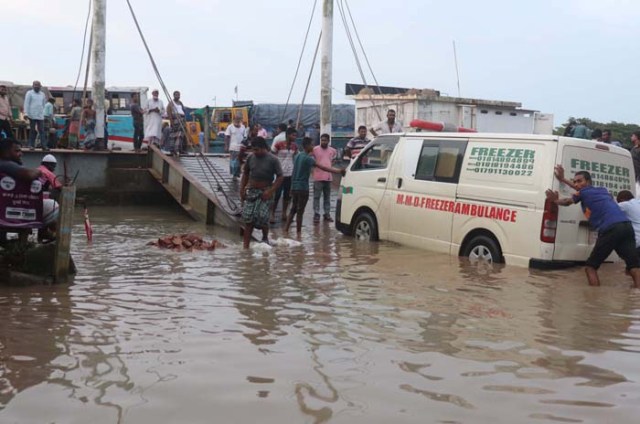 Online Desk : The flood situation in Shariatpur has further deteriorated as the water in the river Padma rose by 5cm at Sureswar point in the district and was flowing 40cm above the danger level on Friday afternoon.
The Narsinghapur ferry terminal on the Shariatpur section of the Shariatpur-Chandpur waterway has been submerged in the flood waters.

The Narsinghapur ferry terminal on the Shariatpur-Chandpur waterway has been closed to traffic due to severe flooding in the river. The pontoon of the ghat was submerged under 3/4 feet of water and the vehicles could not move on the ferry.

More than 300 vehicles including freight trucks were found stranded at Narsinghpur Ghat in Shariatpur part for last 5 days and were waiting to cross. Passengers and drivers have suffered much.

“It is not possible to lift the car onto the ferry. Also, there is an extra traffic pressure at the port due to the closure of Kawrakandi ferry terminal. As a result, more than 300 freight trucks and other vehicles are stuck at Shariatpur part of Narsinghapur Ghat waiting to cross,” he said.

Jitu Mia demanded of the authorities concerned to raise the ghat immediately.

Besides, the main road of Shariatpur and various parts of the Shariatpur-Mawa road have been submerged under two to three feet of water and the traffic on this road has remained stopped. Sufferings of passengers are mounting.

Meanwhile, the only means of communication between Dhaka and Shariatpur inhabitants on the road is to submerge 2 to 3 feet of water at various places on the Shariatpur-Mawa road. As a result, people coming from Dhaka to go to different upazilas including district cities are suffering a lot.

Besides, flood water is entering different areas of Shariatpur municipality beyond the villages. Large areas of Charpalang, Kotapara and Shantinagar of the municipality have been flooded.