Some 4m people of 31 districts in Bangladesh affected by floods 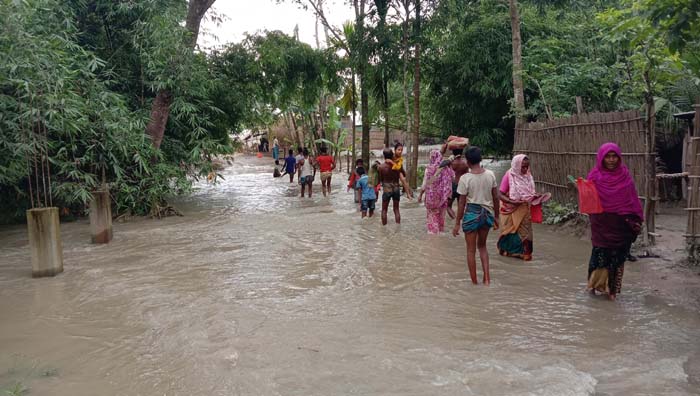 Online Desk : State Minister for Disaster Management and Relief Dr Enamur Rahman on Saturday said that the floods that continued for a month had affected more or less 31 of the 64 districts across Bangladesh.

“The number of families affected by the floods stood at 8,65,800 and the total number of people affected over 39.75 lakh,” said Enamur Rahman while addressing a virtual press briefing from his office at the Bangladesh Secretariat in the capital.

Addressing the flood-affected people, the State Minister said: “Prime Minister Sheikh Hasina remains beside you. She has been monitoring our activities constantly and giving us necessary directives. We have been conducting our relief efforts at her directives. There is no crisis of relife goods at anywhere in the country. We have adequate amount of relief goods. Besides, there is enough stock of relife items at district, upazila, union and ward levels.”

Quoting the statistics of the Flood Forecasting and Warning Center (FFWC) under the Water Development Board (WDB), the state minister said flood started at different parts of the country from June 26 after rise in water levels in the major rivers due to onrush of water from upstream areas. At the end of the first week of July, the waters started receding, but increased again from July 11 and the second spate of flood appeared. The water started to rise for the third time from July 21.

The flood waters may start receding from the first week of August if the sea tide won’t come. Disaster Management and Relief Secretary Mohammad Mohsin was present at the briefing.

Enam appreciated the US effort to help flood affected people in two upazilas in Kurigram–Bamongdanga and Fulchari–but differed with the US observation that flood victims in the area were starving and living under the open skies.

“Our government is trying its best to do for the flood victims,” said Enam.

He said that the government had enough relief stock at national and local levels to tackle flood for 21 more days.

The minister said the government has already distributed 12,010 metric tonnes of rice, 1.21 lakh dry food packets and Tk 3.36 crore in cash among the flood affected people.

Besides, the government provided Tk 1.48 crore and Tk 70 lakh for purchasing fodder to save the livestocks of the flood affected people and baby food respectively.

Moreover, the government distributed 300 bundles of corrugated sheet and Tk 90 lakh in cash among the affected for repair the damaged houses, he said.

The State Minister said 1,519 shelter centres have been opened in the flood-affected areas of the country where 88,062 men, women and children have been staying.

He said all the disaster management committees have been linked with 333 helpline number. Relief would be sent if anyone facing food shortage contact with 333 Helpline Number. Necessafry directives have already been given in this regard.