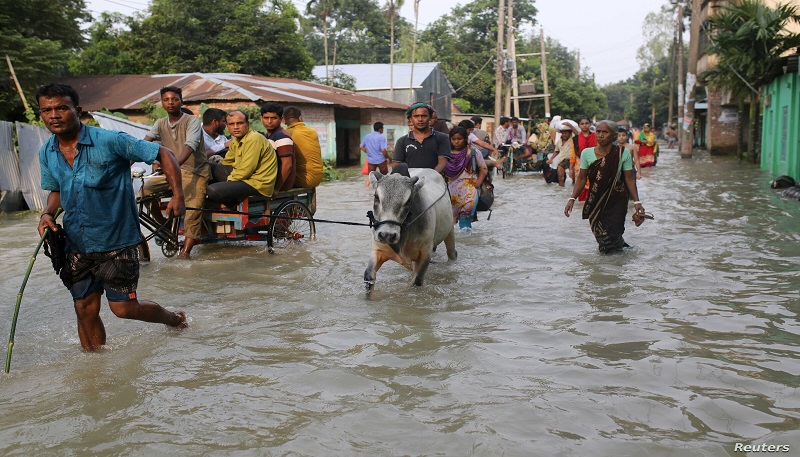 Online desk ; Eid-ul-Azha, the second biggest religious festival of the Muslims, is just around the corner but the coronavirus pandemic and floods have tightened the grip leaving thousands of people stranded and struggling for survival, taking away the joy that accompanies the occasion.

Floods hit vast swathes of Bangladesh as the country is grappling with Covid-19 outbreak. Hundreds of thousands of people are being forced to live under the sky as floods wreak havoc on the cropland, wash away fish enclosures and trigger large scale erosion, putting livelihoods at risk, reports UNB.

According to the Ministry of Disaster Management and Relief, one third of the country has gone under floodwater while officials at the Flood Forecasting and Warning Centre (FFWC) said the raging floods have already affected over 1.5 million people.

The United Nations, meanwhile, reminded that the flooding in Bangladesh could be the most protracted since 1988.

How can there be joy when survival is the biggest challenge?

Seven people died from causes related to floods in 24 hours till Friday noon, according to the Directorate General of Health Services (DGHS).

People in flood-hit areas are suffering from shortage of drinking water, food, shelter and sanitation.

A survey of Bangladesh Institute of Development Studies (BIDS) found that about 13 per cent of people have become unemployed in the country due to Covid-19 pandemic. The floods came as a crushing blow to people struggling for survival.

The FFWC on Friday said the residents of 20 districts of the country are reeling under the wave of floods.

A FFWC bulletin said the flood situation may improve further in Sylhet, Sunamganj, Brahmanbaria and Netrakona districts in the next 24 hours while it may remain static in Manikganj, Munshiganj, Faridpur, Madaripur, Chandpur, Rajbari, Shariatpur district and low-lying areas of Dhaka district.

But the overall flood situation is likely to worsen further in Kurigram, Gaibandha, Natore, Bogura, Jamalpur, Sirajganj, Tangail and Naogaon district in the next 24 hours, said the FFWC.

Nineteen rivers are flowing above the danger levels.

Our Kurigram correspondent reports that 3,50,000 people have been marooned as the flood situation worsened further due to the increase of river water. Civil Surgeon Dr Habibur Rahman said 20 people, including 15 children, drowned until Friday.

Dharla River was flowing 83cm above its danger level at Bridge point, while Brahmmaputra was flowing 74cm above at Chilmari point and 62cm at Nunkhawa point.

Bangladesh’s Covid-19 death tally reached 2,836 on Friday after the health authorities announced the death of 35 more coronavirus patients in the last 24 hours until morning.

During this period, 2,548 fresh cases were detected after testing 12,027 samples. So far, the country has recorded 218,658 cases, making Bangladesh the 17th worst-hit country globally.

Since March 8, when the first cases were reported, 10,91,034 samples had been tested with an overall infection rate of 20.04 percent, Additional Director General of the Directorate General of Health Services (DGHS) Prof Dr Nasima Sultana said at a regular online briefing.

She said 1,768 patients have recovered in the last 24 hours, putting the total number of recovered patients to 1,20,976.

The number of deaths per million population is still 17 while Bangladesh detected 1,327 confirmed cases per million.

Eid-ul-Fitr, the largest religious festival of the Muslims, was celebrated on May 25, also under the shadow of the coronavirus pandemic.