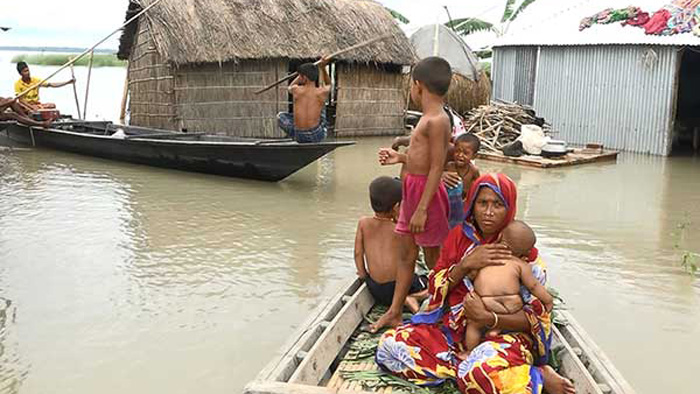 Online Desk : A total of 11,14,508 families of 33 districts of the country have become marooned, while 43 have died due to the devastating floods this year.
Besides, a total of 54,40,331 people of these families have been affected by the floods in various ways.

It was stated in a press release sent from the Ministry of Disaster Management and Relief on Sunday. It said 159 upazilas and 1,019 unions of 33 districts have been affected by floods.

Besides, 43 people have died in floods in the country so far. Of them, 15 died in Jamalpur, one in Lalmonirhat, three in Sunamganj, one in Sylhet, nine in Kurigram, four in Tangail, two in Manikganj, one in Munshiganj, one in Gaibandha, two in Naogaon, two in Sirajganj and two in Gopalganj have died.

It was further stated in the press release that 1,533 shelter centres have been opened in the flood affected districts. A total of 63,409 men, women and children have taken shelter at these centres.

Besides, 78,046 cattle have been brought at the shelter centres.

The press release reads that 967 medical teams have been formed at the flood-affected districts. Of these, 399 are now in operation.

Cash Tk 3,44,50,000 have been allocated to the flood affected districts till Saturday. Besides, Tk 10 lakh have been provided as bay food assistance. Of the amount, Tk 62,54,000 have been spent.