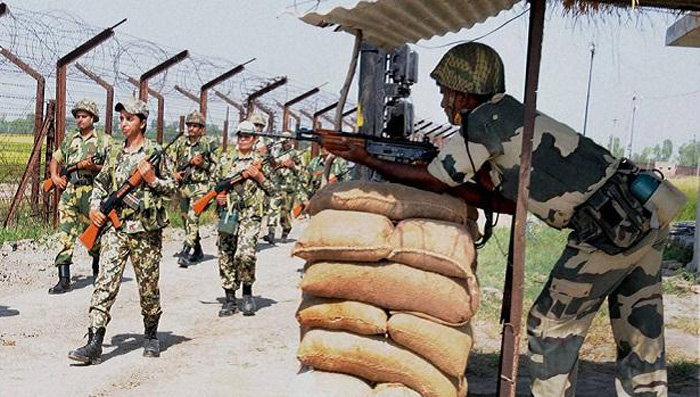 Online Desk : A constable of the Indian Border Security Force (BSF) shot two of his colleagues in North Bengal late on Monday at evening in one of the case of fratricide in paramilitary forces, report Indian media on Tuesday.
The accused surrendered later and was handed over to the police.

The three BSF personnel had been on responsibility alongside the Indo-Bangladesh border at Raiganj police station in North Dinajpur district on Monday evening.

They were connected to the Maldakhand border outpost of BSF’s 146 battalion.

Whereas Sutradhar belongs to Tripura, slain Bhatti and Kumar hailed from Punjab and Uttar Pradesh, respectively.

A senior police officer said accused Sutradhar had some grievances towards some BSF officers, which might have led to the fratricide. However, the BSF authorities are yet to find the reasons behind the killings.

At round 11:50pm on Monday, Sutradhar fired two rounds of bullet within the air from his service rifle. When Bhatti and Kumar rushed to the spot, Sutradhar opened fire on them and killed them on the spot.

“The corporate commander reached the spot and the constable surrendered to him at around 3:00am. The victims neither had any quarrel nor scuffle with the accused. The reason for firing shall be ascertained after the conduct of a probe,” said Rajeev Ranjan Sharma, deputy inspector of BSF, North Bengal Frontier.

The bodies were sent for autopsy and Sutradhar was handed over to the police, he added.