Bangabandhu’s fugitive killers to be brought back in Mujib year, hopes FM 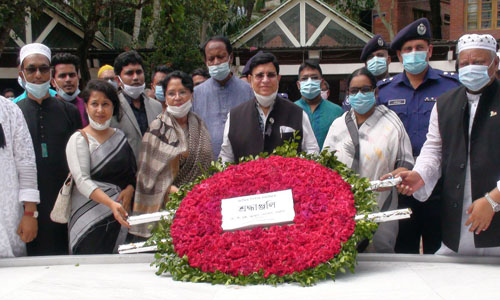 Online Desk : Foreign Minister AK Abdul Momen on Friday said that a process is underway to bring back the fugitive convicted killers of Father of the Nation Bangabandhu Sheikh Mujibur Rahman by the Mujib Year.
“Changing their names and addresses, the killers are hiding in different countries. The government is keeping contact with those countries to bring them back. Meanwhile, some of the fugitive killers had been brought back to implement the court verdict,” he said.

The Foreign Minister said this after paying tribute to Bangabandhu Sheikh Mujibur Rahman at his grave in Gopalganj’s Tungipara in the afternoon.

He said the expatriates who returned home during coronavirus pandemic would be sent to those countries once the situation becomes normal.

“Discussions with the countries concerned are continuing so that they can go back at a shortest possible time,” said Abdul Momen expressing hope that the process to sent expatriates would start soon after resuming flights.

Replying to a question over the plights of expatriates, the Foreign Minister informed that the government is solving the expatriates’ problem with sincerity.

“The expatriates in home and abroad are now doing well. Bangladesh missions in different countries are keeping contact with them and extending all-out cooperations to them,” he added.

The minister also offered Fateha and joined a special munajat seeking eternal peace of the departed souls of Bangabandhu and other martyrs of the August 15 carnage.