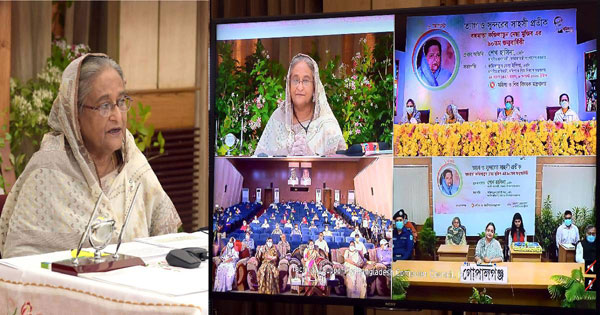 Online Desk : Prime Minister Sheikh Hasina on Saturday said Bangamata Sheikh Fazilatunnesa Mujib sacrificed her personal desires and demands in many ways to create a scope for Father of the Nation Bangabandhu Sheikh Mujibur Rahman to fully work for the country.

“Nothing can be bigger than sacrificing one’s personal desires and demands. My mother set that example,” she said while addressing a programme arranged to celebrate the 90th birth anniversary of Bangamata Sheikh Fazilatunnesa Mujib, reports UNB.

The Prime Minister joined the virtual programme from her official residence Ganobhaban, while other participants got connected from Bangladesh Shishu Academy and Gopalganj.

Mentioning that Bangamata had no personal demand and never annoyed Father of the Nation Bangabandhu Sheikh Mujibur Rahman with family matters, she said, “So, my father had got the scope to fully work for the country.”

Sheikh Hasina urged the womenfolk of the country to follow the ideology of Bangamata to build a family, an organisation and the country as nice ones.

Recalling the role of Bangamata in the country’s independence, she said Bangamata had taken the right decisions in various critical times in politics.

“When a matter of taking a tough decision came in politics on various occasions, it’s very sad to say many of our senior and experienced leaders had failed to take the right decisions or taken wrong decisions. My mother had taken the right decisions at the right time. Alongside dealing with family affairs, Bangamata used to take care of the families of the detained and ailing leaders, and arrange their treatment,” said the PM.

Hasina said her mother used to guide the organisation (AL) with competence (particularly when Bangabandhu was in jail) and give the right decisions.

Matia Chowdhury, MP presented the keynote paper at the function focusing on the life and works of Bangamata, held with State Minister for Women and Children Affairs Fazilatun Nessa Indira, MP, in the chair.

At the function, a documentary was screened highlighting the life and works of Bangamata Sheikh Fazilatunnesa Mujib.

The state minister, in her speech, said the day is being celebrated in all districts and Bangladeshi missions abroad across the world for the first time.

On behalf of the Prime Minister, Deputy Commissioner of Gopalganj Shahida Sultana distributed sewing machines among insolvent women and laptops among meritorious students in addition to providing cash to destitute women through mobile banking channel in the ancestral district of Bangamata.

On the occasion of the birth anniversary of the Bangamata, some 3,200 sewing machines and 100 laptops were distributed as well as cash support was provided to 1,300 destitute women.