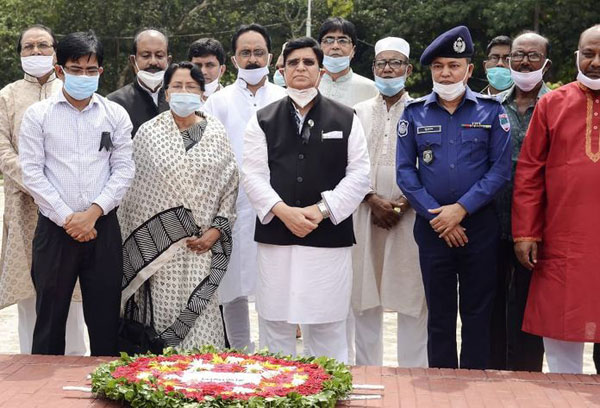 Online Desk : Foreign Minister Dr AK Abdul Momen on Saturday said Bangladesh’s relations with India and China should not be compared saying Bangladesh emphasizes on its development through cooperation and collaboration.

“Bangladesh’s relations with India is rock-solid and historic while Bangladesh has economic ties with China. We must not compare,” he said emphasising on joint efforts.

The Foreign Minister does not want to bring anything in Bangladesh’s relations from the India-China relations saying it is nothing to do with Bangladesh.

Bangladesh is focusing on its own development, said Dr Momen adding both India and China are Bangladesh’s big trading partners and Bangladesh wants more trade benefits from India.

“There are some issues. We will resolve those. Keep faith on us,” he said.

Asked about trial of coronavirus vaccine in Bangladesh, the Foreign Minister said many countries like India and Pakistan went for collaboration.

He said a Chinese company is developing a relationship with the icddr,b which is an institution of 28 countries.

“We have nothing to do with it. Some are trying to make it a political issue. This is purely a research,” Dr Momen said the government will think of it.

The Foreign Minister suggested to talk to the Health Ministry for details.

He said the government has contributed to the European Union so that Bangladesh gets vaccine smoothly.

Dr Momen said vaccine should be distributed in an indiscriminate way and Prime Minister Sheikh Hasina said it needs to make sure that no one is left behind.

The Foreign Minister reiterated that the government is working to bring back convicted killers of Bangabandhu, at least one more in this Mujib Barsho, to execute them to implement the court verdict.

“It’s our hope,” he said adding that one of the killers was executed recently.

The Foreign Minister also sought support from Bangladeshi expatriates living in different countries alongside the government initiative to bring back the remaining five fugitive convicted killers of Father of the Nation Bangabandhu Sheikh Mujibur Rahman and execute the verdict.

One of them is in the United States while another one in Canada, he said.

On November 19, 2009, the Appellate Division of the Supreme Court upheld the death penalty of 12 convicted former army officials for the assassination of Bangabandhu and his family members.

Of the fugitives, the government knew the whereabouts of Noor Chowdhury, Rashed Chowdhury and Moslehuddin while it was not sure about the other three fugitives — Rashid and Dalim.