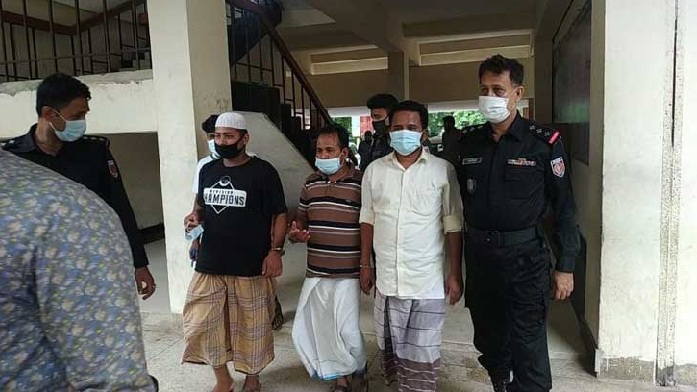 Online Desk : Three more people have been arrested for their alleged involvement in connection with the gruesome killing of Major (Retd) Sinha Mohammad Rashed Khan in police firing at Teknaf in Cox’s Bazar.
The arrested are Nurul Amin, Nizam Uddin and Mohammad Ayaz. They are the witnesses in two cases filed by police with the Teknaf Police Station and Ramu Police Station.

Members of the RAB-15 arrested them on Tuesday. They were shown arrested after their involvement was found during questioning under the RAB custody.

Producing the arrested witnesses before the Cox’s Bazar District Senior Judicial Magistrate Mohammad Helal Uddin’s court in the afternoon, the RAB-15 official concerned pleaded to the court to place each of them on a 10-day remand for questioning.

However, the court fixed Wednesday for remand hearings of three arrested persons.

Earlier, the arrested witnesses told media that none of them had witnessed the murder of Major (Retd) Sinha. They were called in at the local police outpost following the murder. Later, they were taken to the Teknaf Police Station in the following morning where police took their signatures on blank papers. They later learnt that they were made witnesses by police in two seperate cases.

RAB-15 has already been given the responsibility to investigate the two cases filed by police in connection with Sinha’s killing. Police have been investigating the cases so far.

Following the killing of Major (Retd) Sinha in police firing at Shamlapur checkpost in Teknaf on July 31 night, police hurriedly lodged two separate cases in connection with murder and narcotic acts. One of the cases was filed with Teknaf Police Station, in which, Shahedul Islam Sifat was named as prime accused.

It was mentioned in the cases that police were obstructed in discharging their duties that resulted in the killing of Major (Retd) Sinha at night on July 31, and drugs were found in Sifat’s possession.

The other case was filed with Ramu Police Station under the Liquor and Narcotics Act, in which, Shipra Debnath was made prime accused. Showing Sifat and Shipra in the cases, police sent them to the Cox’s Bazar District Jail.

Responding to a plea of RAB-15 of Cox’s Bazar, the same court placed OC Pradeep Kumar Das, Inspector Liakat Ali and sub-inspector Nanda Lal Rakshit on a seven-day remand under the RAB custody. The court also asked the RAB-15 to question the rest four accused–constables Safanur Karim, Kamal Hossain, Abdullah Al Mamun and SI Liton at the Cox’s Bazar District Jail Gate as they have been kept there.