You’re my most near and dear ones, PM tells orphans 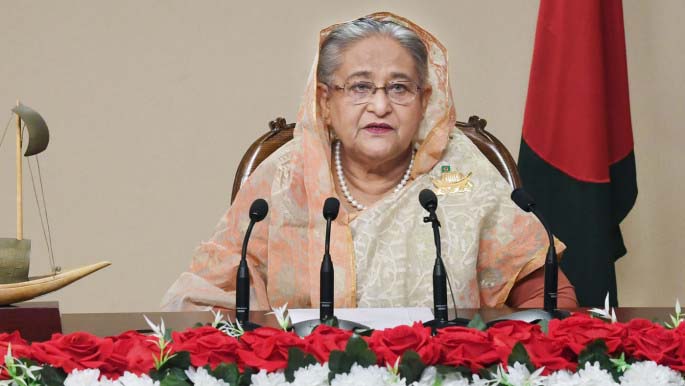 Online Desk : Prime Minister Sheikh Hasina on Friday described the orphans as her ‘most near and dear ones’ and vowed to build a beautiful future for them, reports BSS.
“I want to tell you one thing that you’re not orphans and helpless … you’re my most near and dear ones. Our government since assuming office always remains beside you and as long as I remain alive, I’ll also stay by you,” she said.

The premier added: “There are efforts of mine always to build a beautiful future for you.”

Referring to the assassination of her parents and most of her family members on the fateful night of August 15 in 1975, Sheikh Hasina said: “Naturally, we understand very well the pain of the orphans as we have become orphans through the August 15 carnage.”

“You’re not alone. I remain beside you and I and my younger sister always think about your welfare,” she said in an emotion-charged voice.

The prime minister was addressing a function marking the completion of recitation of holy Quran for 50,000 times by the children of 85 “Shishu Paribar” and six “Shishu Nibash” across the country on the occasion of Mujib Borsho as well as a milad and doa mahfil on the occasion of the 45th martyrdom anniversary of country’s founding president Sheikh Mujibur Rahman.

The prime minister joined and addressed the event through a videoconference from her official Ganabhaban residence in Dhaka Friday morning.

Sheikh Hasina mentioned that they celebrate birthday of their children, grandchildren, and martyred brothers by taking with orphans.

“We don’t arrange any feast or birthday party on the occasion. We observe it by taking with the children like you. Whatever we could we send to the orphanages … we send food there (on the occasion),” she said.

She went on saying: “We realise that there is no benefit to organise [birthday] party. It’ll be the biggest work, if we could put something in the mouth of the orphans. We’re working in this way.”