Momen seeks cooperation from diplomats in bringing back Bangabandhu’s killers 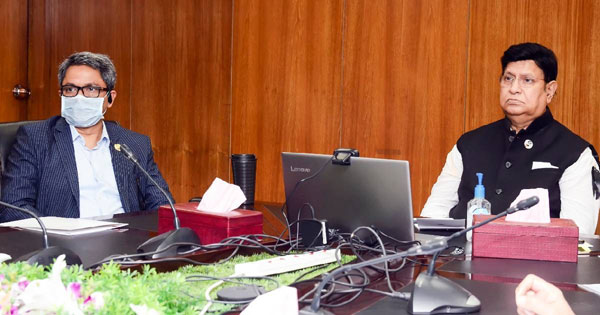 Online Desk ; Foreign Minister Dr AK Abdul Momen on Sunday sought cooperation from foreign diplomats in bringing back fugitive killers of Father of the Nation Bangabandhu Sheikh Mujibur Rahman.
He was addressing a virtual discussion with foreign diplomats stationed in Dhaka and New Delhi marking the National Mourning Day to commemorate the 45th anniversary of martyrdom of Father of the Nation, reports UNB.

Around 83 diplomats stationed in Dhaka and New Delhi joined the discussion hosted by the Ministry of Foreign Affairs.

The Foreign Minister said five killers of Bangabandhu remain fugitive and the government came to know the whereabouts of two of them.

“We don’t know the locations of three killers,” he said requesting friendly countries to help Dhaka identify their locations and return all the fugitives to Bangladesh.

The Foreign Minister said the government wants to implement the court verdict to ensure justice and the rule of law in the country.

The trial of Bangabandhu murder case was impeded by promulgating an Indemnity Ordinance and the BNP-Jamaat Alliance government stopped the trial.

One of the killers — former captain Abdul Majed — was executed recently.

At the beginning of the discussion, a one-minute silence was observed paying tributes to Bangabandhu and his family members who were killed.

On August 15 in 1975, the Greatest Bangalee of all time, Father of the Nation Bangabandhu Sheikh Mujibur Rahman along with most of his family members was brutally assassinated.

Then Director General of DGFI Brigadier General Jamil Uddin Ahmed, who was also Bangabandhu’s Military Secretary, was also murdered. Several members of a family died in the capital’s Mohammadpur area by artillery shells fired by the killers on the same day.