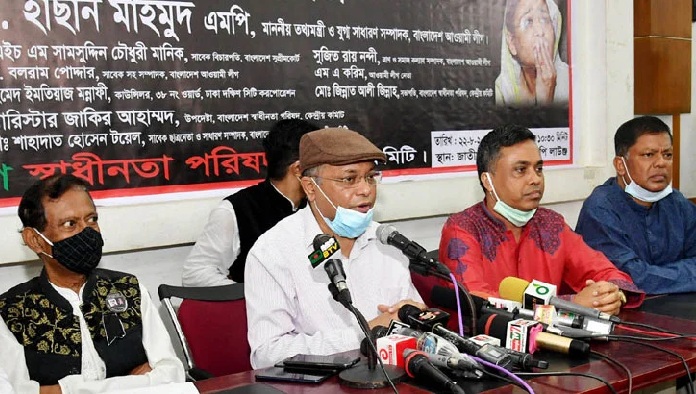 Online Desk : Terming the August 21 gruesome grenade attack as one of the heinous crimes in the globe, Information Minister Hasan Mahmud on Saturday said the then prime minister and BNP chief Begum Khaleda Zia too is responsible for the grenade attack.

“The then prime minister Begum Zia had failed to provide security to the country’s main opposition leader and she (Khaleda Zia) can’t avoid the responsibility. It happened with her knowledge,” he said addressing a discussion at an auditorium of Jatiya Press Club here.

Swadhinata Parishad organized the meeting demanding the expediting of trial of the August 21 grenade attack case.

In the beginning of the speech, the information minister paid rich tribute to Father of the Nation Bangabandhu and other martyrs of his family who were assassinated brutally on August 15, 1975 and the martyrs of the August 21, 2004 grenade attack.

Hasan said the all responsibilities went to Begum Zia as attempts made to divert the trial of the attack meant she (Khaleda) is also accused in this case.

Khaleda Zia, the then Prime Minister, is responsible for everything that has been done to divert the trial of this attack case. So it would need to bring her under the trial also, he added.

Reminiscing the August 21 horrible attack and the incidents of obstacles on rescue of the wounded and also treatment, the information minister said the grenade attack was not only a heinous crime in Bangladesh rather in the world. “In the contemporary world, has any incident like the grenade attack on the opposition leader at a party meeting happened?,” he questioned.

He said Shah AMS Kibria, Ahasanullha Master, Mamtaz Uddin and Manzurul Imam were killed in rallies during the BNP regime. Sheikh Helal and Suranjit Sen Gupta were also attacked by them (BNP), he added.

The information minister said all attacks were carried out for clinging to power by Begum Zia for long and to assassinate Sheikh Hasina. “For this, a Canadian court gave a verdict branding BNP as a party of terrorists. BNP is now an internationally recognized terrorist party. They should seek apology from the nation for their heinous crimes,” he added.

Advisor of the parishad Barrister Jakir Ahmed presided over the meeting while its general secretary MdShahdat Hossain conducted it.