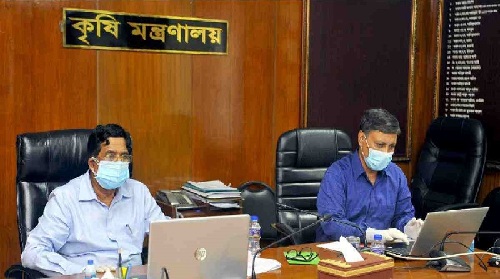 Online Desk ; Agriculture Minister M Abdur Razzak has said that the cultivation of Aus has increased all over the country as a result of the government’s incentives.

“Government has taken various initiatives to increase paddy production across the country, as a result production of Aus paddy has improved,” he said while inaugurating the Aus paddy harvesting at village Kalachandpur under Sadar upazila in Meherpur district. It was organized by Meherpur district administration and Department of Agriculture Extension.

The agriculture minister said the government has given various incentives to farmers including seeds, fertilizers and irrigation to increase Aus cultivation.

“Fertilizer prices have been reduced and agricultural scientists have developed many high-yielding varieties that have also increased the average crop as a result of cultivation,” he added.

The Agriculture Minister said that people have to work with utmost importance in the market of agricultural products.

If the agricultural products of this country can be exported to the markets of developed countries including Europe and America, it is possible to earn a huge amount of foreign exchange, he added.

Therefore, an initiative is being taken to set up an agro processing center in Purbachal, so that agricultural products can be exported from this country according to international standards, said the minister.

State Minister for Public Administration Farhad Hossain said Meherpur is a very rich region in agriculture and has the potential to make a significant contribution to the country’s agriculture in the future.

He said that the present government has taken various activities for the development of agriculture in the region, some rivers have already been dug to facilitate irrigation.

The state minister also emphasized on the use of modern technology to take agriculture forward by harnessing the various potentials of the region.