Aug 21 is an accident to BNP as goal of attack not successful: Quader 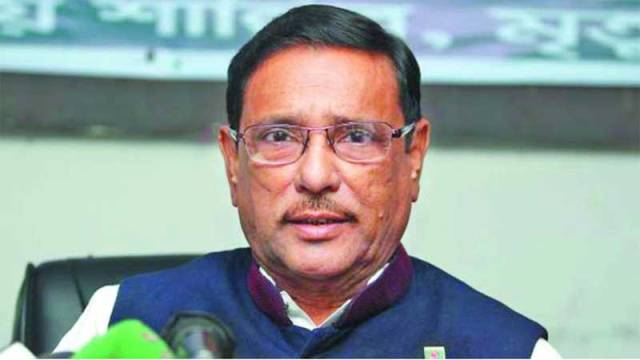 Online desk ; Road Transport and Bridges Minister Obaidul Quader on Saturday said the state machinery was abused under an orchestrated plan in launching the gruesome grenade attacks on August 21, 2004.
“In continuation of the August 15 (1975) carnage, the grenade attacks were carried out in a planned way to assassinate Deshratna Sheikh Hasina,” he told a regular view exchange with Rajshahi road zone officials through videoconferencing from his official residence on parliament premises in Dhaka.

Quader, also Awami League general secretary, said BNP is now out to distort the incident of August 21 grenade attacks by terming it an accident.

He said various documents and statements of Mufti Hannan, kingpin of banned militant outfit Harkat-ul-Jihad al-Islami, revealed who perpetrated the grisly attacks and who held meetings to lunch it.

The attacks were carried out under the directives from Hawa Bhaban, the alternative power house of the then BNP government, and BNP’s top leadership knew everything about the blue print, he added.

Quader said BNP wanted to make the Awami League, the then opposition party in parliament, leaderless and wipe away the spirit of the Liberation War.

“Bangabandhu’s daughter and the then Opposition Leader Sheikh Hasina was the prime target of August 21 grenade attacks. As Sheikh Hasina narrowly escaped the death and the planned conspiracy of Hawa Bhaban could not be successful, the incident seems to be an accident to BNP leaders,” he said.

The AL general secretary said the then BNP government did everything to halt the trial of the ghastly grenade attacks by impeding the investigation, staging ‘Joj Mia’ drama and destroying the evidences and such acts are now clearly revealing their involvement with the design before the nation.

Turning to the coronavirus situation, the minister said there is no logical reason to think that the virus transmission would end soon or the virus is going away from the country.

Negligence in following health guidelines thinking that virus transmission would end soon can enhance the risk, so everyone must abide by health guidelines including wearing of facemask while going out of home, he said.

The virus transmission remains at a certain stage now as it is not increasing or decreasing, he said, adding that though the situation in Bangladesh is quite better than other countries, there is no reason to be self-satisfied.

According to experts, Quader said, the situation may worsen any time in Bangladesh as many European countries, including Spain and Oceania country New Zeeland, are witnessing second wave of coronavirus outbreak.

The minister said the government gave permission to resume transportation and took the decision to adjust public transport fare on the condition of keeping some seats empty to maintain physical or social distancing but it now seems that many transports are not following the rules.

“If transports do not keep empty some seats or maintain health guidelines, why the passengers would give additional fare?” he questioned.

Motioning that taking up preventive measures is the best strategy to check virus transmission, he urged all to follow the rules and health guidelines properly to stay safe from being infected by the deadly virus.