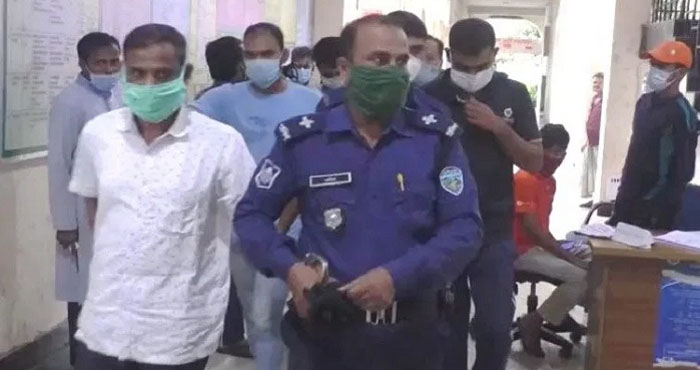 After their arrest on August 18 last, the three APBn members were produced before the court of Cox’s Bazar Senior Judicial Magistrate Tamanna Farah. RAB pleaded to the court to place the accused on a ten-day remand in a case (GR 703/2020) filed with Teknaf Police Station. However, the court placed them on a seven-day remand.

Jail super Mokammel Hossain of Cox’s Bazar District Jail told journalists that a team of RAB-15 in Cox’s Bazar went to the jail at about 10:30am on Saturday. The RAB-15 team later left the jail with the three accused APBn members for questioning. All the three APBn members were on duty at Shamlapur Police Checkpost at night on July 31 last.

RAB media wing director Lt Col Ashique Billah said the interrogation of three APBn members who were on duty at the Shamlapur check-post at the time of Sinha murder indicated that they were involved in the killing. So their remand was sought after their arrest. The court granted a 7-day remand. The RAB expects more information to come out during the interrogation.

It may be mentioned that Major (Retd) Mohammad Rashed Khan was killed in police firing at Shamlapur Police Checkpost under Baharchhara union in Teknaf upazila at about 10:00pm on July 31. Following the incident, sister Shahriar Sharmin Ferdous of the slain army officer filed a murder case at a Cox’s Bazar court on August 5 accusing nine police personnel including suspended Teknaf Police Station OC Pradeep Kumar Das and Baharchhara Police Outpost in-charge Inspector Liakat Ali. The court gave the responsibility of investigation of the case to RAB.