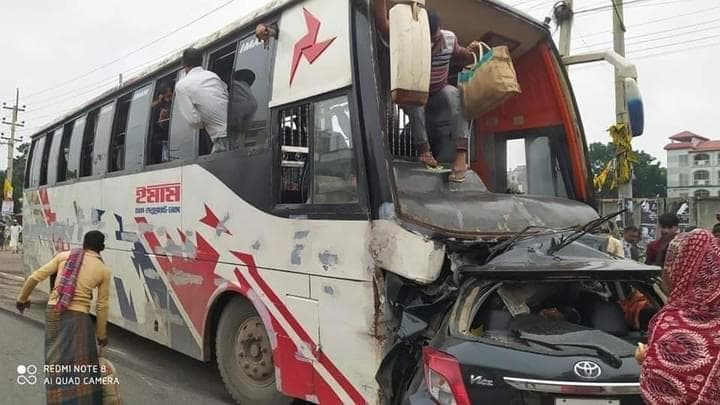 online desk ; It was 8 o’clock on Saturday morning. Hasina Begum was eagerly waiting to meet with near and dear ones at her father’s house under Trishal upazila in Mymensingh district. But, all her hopes were shattered when a bus rammed her car, leaving six people including Hasina dead on the spot.
Hasina lost three of her family members in the tragic accident which took place near Bhaluka Degree College on the Dhaka-Mymensingh Highway under Bhaluka upazila in Mymensingh district.

According to police, Hasina Akter was going to her father’s house in Trishal from her husband’s house at Hotapara in Gazipur district by a private car early in the morning.

But, a speeding bus, belonging to Imam Paribahan, rammed the car while it was taking a U-turn around 8.30am, leaving six passengers of a same family on board the car dead on the spot and 15 bus passengers injured.Traffic movement on the Dhaka-Mymensingh highway was halted for two hours for the rescue operation.

Members of fire service with assistance of police recovered the dead bodies from the car in a one hour effort after cutting different parts of it.

Witness Asif Ali Sheikh said he saw the speedy bus rammed the private car while it was taking U-turn, leaving six people dead on the spot.

Bhaluka Fire Service station officer Abdullah Al Mamun said they went to the spot after hearing about the accident and handed over the bodies to highway police after recovery. Fifteen injured people received treatment at Bhaluka Upazila Health Complex, he added.

The bodies were kept at the police outpost, he added.

A case in this connection is underway, said officer-in-charge Md Mainuddin of Bhaluka Model Police Station.