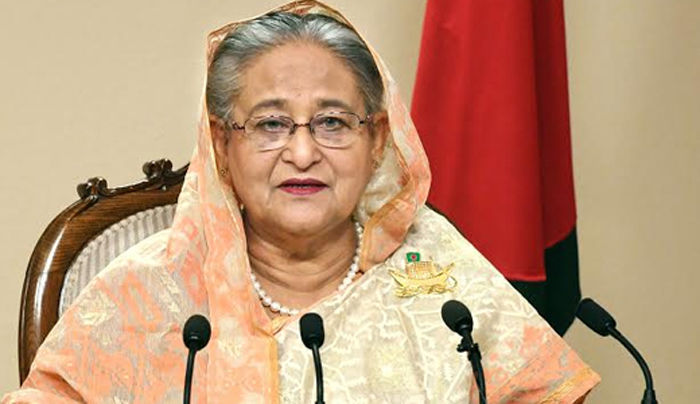 Online Desk : Prime Minister Sheikh Hasina on Wednesday said the historic Six-Point Demand was solely the brainchild of Father of the Nation Bangabandhu Sheikh Mujibur Rahman as no-one else was involved in formulating this crucial political programme that led the county to its Independence.
“Many people want to say many things regarding the Six-Point Demand…some say it was done by that person’s suggestions, some says it was formulated with advice from those persons, but, I know for sure, it was the brainchild of his (Bangabandhu Sheikh Mujibur Rahman) own thinking,” she said, reports UNB.

The Prime Minister said this while distributing awards among the winners of quiz competition, which was organised marking the historic Six-Point Demand (June 7).

The Prime Minister joined the programme from her official residence Ganobhaban virtually.

Recalling the background of this historical demands of the country, she said Bangabandhu was arrested in 1958 and released in December 17, 1969. At that time, the politics was banned. Bangabandhu could not go outside Dhaka, and he joined Alfa Insurance Company.

She mentioned that Tajuddin Ahmed was also under arrest at that time. After release, he went to Fatulla, Narayanganj to join his job. Bangabandhu himself went to Narayanganj and bring Tajuddin Ahmed back to Dhaka and gave a job in Alfa Insurance Company.

Sheikh Hasina, the eldest daughter of Bangabandhu Sheikh Mujibur Rahman who was studying at Dhaka University then, said the Father of the Nation appointed Mohammad Hanif as his PA in the Alfa Insurance Company.

“Bangabandhu used to think, write down those and gave those write-ups to Hanif for typing out. Here only Hanif knew about this (Six-Point Demand) as he typed out that …no-one else would know about it,” she said.

The Prime Minister categorically said the Six-Point Demand came out from the thoughts of Bangabandhu after the 1965 India-Pakistan war that lasted for three weeks and the then East Pakistan (now Bangladesh) was totally left defenceless.

She also said after the arrest of Bangabandhu and other front-ranking AL leaders due to the announcement of the Six- Point Demand, Begum Fazilatunnesa Mujib (mother of Prime Minister Sheikh Hasina) had played a great role in publicising and advancing the movement centring these demands.

“It cannot be imagined the contributions of my mother to Bangladesh, she always knew what my father wanted, she was very aware about those,” Hasina said.

The Prime Minister said the August-15, 1975 massacre stopped the advancement of Bangladesh.

Talking about the August-15, 1975 brutal killing of Bangabandhu and his family members, she said that with that killing the defeated force emerged in the country and they tried to diminish the country’s victory.

“I think there’s no scope for that now…history has its own course… no one can erase that and that’s established today,” she said.

Sheikh Hasina said the government wanted to advance the country following the path shown by the Father of the Nation.

“If we want to make Bangladesh as ‘Golden Bengal’ free from poverty and hunger, and a developed and prosperous one, then we must take lessons from history and follow the footsteps of the Father of the Nation. And we’ve to uphold our victory,” she said.

A documentary on Bangabandhu and historic Six-Point Demand was also screened at the programme.