Bangabandhu a personification of principles of freedom, equity: Nigeria 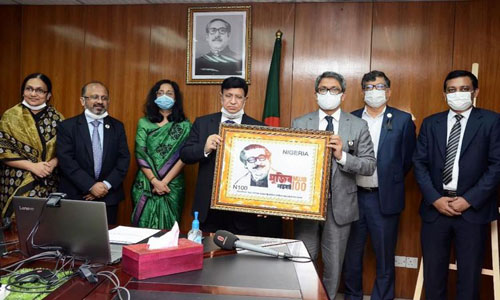 Online Desk ; Nigerian Foreign Minister Geoffrey Onyeama has described Bangabandhu Sheikh Mujibur Rahman as “an icon in the struggle for the independence of Bangladesh, and a personification of the principles of freedom and equity”.
He said that Bangabandhu was a true leader, an undaunted advocate of the interests of the Bengalis and a hero not only to Bengalis but also to all peace-loving people across the world.

The Nigerian Foreign Minister expressed satisfaction that his country released the commemorative stamp to mark the birth centenary of Bangladesh’s founding father.

He said that this would surely go a long way in further strengthening the existing cordial relations, said the Bangladesh High Commission in Abuja, Nigeria on Friday, reports UNB.

The Nigerian Foreign Minister concluded sharing the famous quote by Cuban leader Fidel Castro about Bangabandhu (I have not seen the Himalayas, but I have seen Sheikh Mujib, in personality and courage, this man is the Himalayas. I have thus had the experience of witnessing the Himalayas).

Held at the auditorium of the Bangladesh High Commission, Abuja, both the ministers attended the event digitally.

At the outset, there was a digital projection on the life of Bangabandhu.

In his remarks, while sincerely thanking the Nigerian government for the release of the commemorative stamp, Dr Momen said that the sacrifice, ideology and struggle of Bangabandhu will continue to inspire all freedom-loving people of the world.

The release of the commemorative stamp is a fitting tribute to Bangabandhu and to the cordial relationship between the two friendly countries, he added.

Dr Momen also highlighted on the impressive progress Bangladesh is making in various sectors turning it into a “Role Model” under the dynamic leadership of Prime Minister Sheikh Hasina, the daughter of Bangabandhu.

Noting that Nigeria is the largest economy of Africa, the Bangladesh Foreign Minister expressed his satisfaction that both countries are currently working for signing of few agreements/MoUs on agriculture, education, culture, defence, avoidance of double taxation etc.

In his remarks, the Dr Ismail Adebayo Adewusi, Post Master General/CEO of the Nigerian Postal Service (NIPOST), expressed his satisfaction for being part of the initiative while informing that the Commemorative Stamp is one historic piece and will travel beyond Nigeria.

He said the commemorative stamp which comes in a single denomination of Nigerian Naira 100 is now available for purchase at all post offices across Nigeria and at the Nigerian Philatelic Bureau, Lagos.

Salaheddine-Abbas Ibrahima, Dean of the Diplomatic Corps and High Commissioner of Cameroon, Abhay Thakur, High Commissioner of India, Dr Ismail Adebayo Adewusi, Post Master General/CEO of the Nigerian Postal Service (NIPOST) were present along with members of the Bangladeshi community.

Nigerian Postal Service (NIPOST) in association with the Bangladesh High Commission in Nigeria published the commemorative stamp and it is a part of the year-long celebratory programmes of the High Commission to observe the birth centenary. Shthe bthat he inspected the spot after being informed about the matter.